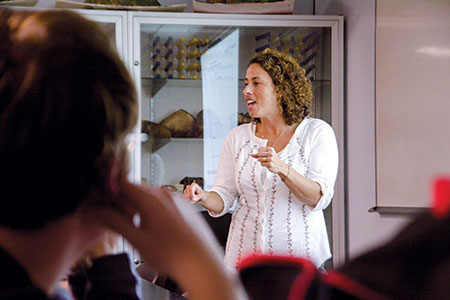 Claudia Benitez-Nelson is on the faculty of the School of the Earth, Ocean and Environment and the Marine Science Program in the College of Arts and Sciences.

Marine scientist Claudia Benitez-Nelson studies the oceanic ebb and flow of trace nutrients, such as phosphorus, and contaminants, such as mercury. She’s also highly invested in helping the scientific community understand the long-term chemical fate of carbon in the greenhouse gas carbon dioxide, a sizable amount of which is absorbed from the atmosphere by the ocean every year.

Perhaps surprisingly, her training and experience also include radioactivity expertise. That’s because in studying chemical species containing isotopes stable to nuclear decay, like phosphate, mercury and carbon dioxide, she uses techniques that involve a number of radioactive nuclides, including naturally occurring trace species like uranium-238 and thorium-234 and anthropogenically produced radionuclides such as cesium-137.

As a result, she is one of a network of scientists around the world uniquely qualified to quantify and track the radioactive fallout from the 2011 Fukushima Daiichi nuclear disaster, most of which eventually ended up in the ocean. And that global network, well-connected though it may be, could use a few more nodes.

“It’s actually a shockingly small number of us,” says Benitez-Nelson says. “While there are more people who look at very specific questions using very specific radioisotopes in seawater, there are relatively few of us who I would call more generalists, people who have experience and do research in both man-made radioisotopes and in the naturally occurring ones.”

There used to be a lot more generalists, she says, but they’re fewer and farther between now, for a variety of reasons. One of the biggest is that the Cold War came to an end.

What we’re finding ... is that 80 percent of that radioactive fallout went into the oceans.

Since the Cold War ended, just a few years after the Chernobyl disaster in 1986, things were relatively quiet on the environmental radioactivity front. And then there was Fukushima in 2011.

Benitez-Nelson and her colleagues recently took stock of the situation. Collaborating as a working group for the Scientific Committee on Oceanic Research, they published a review this summer in the Annual Review of Marine Science that summarizes the radiological consequences to the oceans five years after the disaster.

“What we are trying to understand, number one, is where it all went, the radioactive cesium, the strontium,” Benitez-Nelson says. “And what we’re finding is that a lot of it, 80 percent of that radioactive fallout, went into the oceans. On the one hand that is good, because the answer to pollution is dilution, in some ways.”

They also found that radioactive materials might still be coming out of the site of the disaster.

“We’re seeing high activities in areas that are really close to the power plants that suggest it might still be leaking, or that there’s groundwater that’s contaminated that’s still flowing into the nearby ocean. So it’s not like it was a problem, and now it’s solved.”

The Fukushima disaster served as a bit of a wake-up call in another way to the cadre of marine scientists capable of quantifying and following radiological releases in the ocean. Realizing the dearth in their numbers, they’ve set out to address the situation. The team organized an international training course for 35 students—graduate students, postdocs, and professionals in marine science looking for expertise in oceanic radioactivity research—in Xiamen, China this past June.

“They were from all over the globe. We had students not only from China, but from Japan, South Africa, Australia, Nigeria, Brazil.”

That’s important, she adds, because nuclear power is currently expanding its global footprint, for a variety of reasons.

“Because of the proliferation of nuclear power plants, with so many of them along the coast where there are major population centers, it’s not a question of if another accident will happen,” Benitez-Nelson says. “It’s a question of when.”