What would LBJ say to Trump, Clinton?

After graduate school, Kent Germany began his career listening to dead people – a chance he could not refuse.

Now a University of South Carolina history professor, Germany is one of the nation’s top scholars on U.S. presidential tape recordings. He listened to and transcribed hours of White House tapes, including phone calls, oval office meetings and pieces of daily life from six American presidents.

“Click the right button, and you can get a nonstop LBJ show,” Germany says. “Then hit repeat.” 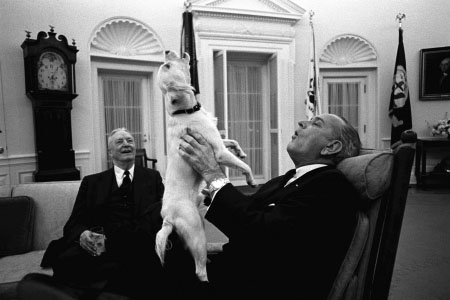 The tapes act as a window into the character of some of the nation’s past leaders, including President Lyndon B. Johnson.

“He really was incredibly smart and funny and crude and shameless and unrelenting, and it’s all there on tape,” Germany says. “Johnson was constantly giving advice. He was someone you wanted on your side in a campaign.”

This advice is the focal point of Germany’s Sept. 1 talk at Carolina titled “What Would LBJ Do? (Top Secret) Lessons for Clinton and Trump.”

“One of the things that I’ll talk about is some advice that he gave Nixon in 1972,” Germany says. “It’s classic LBJ and involves Lady Bird, the Pope, a plane ride and an ABC News correspondent.”

Germany will share the advice LBJ might offer to Hillary Clinton and Donald Trump – much of it in LBJ’s own words from his White House tapes. Germany says he will explore LBJ’s transition from leaving office as one of the least popular presidents to being celebrated for his political genius and unforgettable personality.

“Nixon and LBJ were probably the two most brilliant, and brilliantly flawed, politicians of the past half-century who truly loved fighting and winning,” Germany says. “It helps (LBJ’s popularity) that most of the people who really hated him are dead.”

Some of the positive aspects of Johnson’s presidency, especially his work in favor of civil rights and Medicare, are still relevant today. Johnson was a valuable asset to a political campaign because he was a master at marketing a vision to the American public, says Germany.

Germany will elaborate on these and more lessons in his talk at 6 p.m., Sept. 1 in the university’s Spigner House at 915 Gregg St.

The lecture, which is free and open to the public, opens the University of South Carolina’s History Center fall lecture series. Later in September, the History Center will host Dick Lehr for a talk on “William Monroe Trotter, D.W. Griffith and ‘The Birth of a Nation.’ ” Lehr is a writer, scholar, and former spotlight reporter at the Boston Globe. For more information, contact the History Center in the College of Arts and Sciences at HistCntr@mailbox.sc.edu or 803-777-6172.