As the historic rains pounded Columbia one year ago this weekend, Prakash Nagarkatti knew his office needed to act quickly. 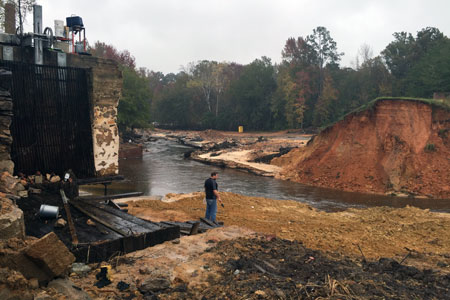 The Office of Research will release results from the yearlong flood research initiative at the S.C. Flood Conference Oct. 7 at the Columbia Metropolitan Convention Center.

“My immediate reaction was how can we study the devastating impact of floods so that we are better prepared in the future,” says Nagarkatti, the University of South Carolina vice president for research whose office created and funded the S.C. Floods initiative. The effort funded 34 research projects across the university system to study the flood’s impact, both immediate and long-term, on utilities, crops, fisheries, infrastructure and aspects of victims’ lives such as mental health.

The grant money was a godsend for researchers such as Hanif Chaudry, a civil engineering professor and associate dean of the College of Engineering and Computing who led a team of researcher to learn as much as possible from the dams that failed.

“It was very time sensitive,” Chaudhry says. “When there is a failure, if they want to rebuild, they will start right away with construction. Or if the dam is gone, the flow of water will change the characteristics of the site. Or if some of the structure is left, it might present a hazard that the owner will move in quickly to remove.”

Chaudhry’s team visited 14 sites with major damage to earthen levees, nine of which involved total failures. Data collection included geometric measurements and samples of the materials present in the remnants of the structures.

Such research could benefit civil engineers as they work to improve structures and lessen the chances for damage the next time.

Another study from economists from the Darla Moore School of Business estimates the floods had a $2.2 billion economic impact on the state, including a temporary boost to the employment numbers thanks to the hiring of cleanup crews. Federal and private dollars injected into the economy actually served as a stimulus.

The Office of Research will release all study results at the S.C. Flood Conference Oct. 7 at the Columbia Metropolitan Convention Center.

One study looked into the social service support networks, which were available to flood victims. That research team was comprised of faculty members from psychology and social work. “The students really get the opportunity to do interdisciplinary or multidisciplinary research. The results are going to be quite unique because these types of events happen very rarely and so the students are going to benefit by trying to pursue this type of multidisciplinary research,” says Nagarkatti.

The yearlong flood studies were just a small part of the work Carolina researchers are doing. Last year, faculty generated a record $250 million of research and sponsored awards. USC has received the classification of “Highest Research Activity” by the Carnegie Foundation.

“Our faculty are engaged in research on health disparity in South Carolina, so they’re looking at strokes, diabetes and obesity. Our engineers are doing research on advanced materials, like how to build planes and cars that are lighter and stronger,” says Nagarkatti.

Visit the Flood Initiative website to learn more about the S.C. Flood Conference.