After the Flood: Economic impact

The flood as economic stimulus 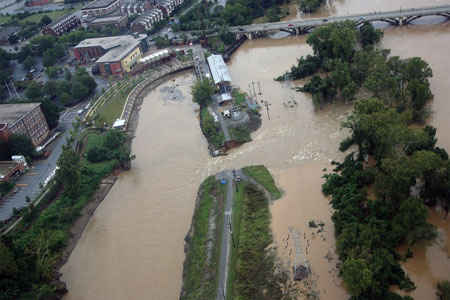 “We see most of the damage in the Midlands and in Charleston, but approximately half of all of South Carolina’s 46 counties had some sort of damage associated with the flood." — Joey Von Nessen, economist, Darla Moore School of Business

First came the rain, then — in one tumultuous weekend — the flooding. But the economic effects of last fall’s weather event lingered long after.

Economists Joey Von Nessen and Doug Woodward at the Darla Moore School of Business are using data from the S.C. Department of Insurance and Federal Emergency Management Agency to better understsand how the flooding has affected the state’s economy.

Those organizations track money flowing into the state to cover losses in agriculture, infrastructure and real estate, and the researchers have seen, in their preliminary data, that significant funding has arrived already. In terms of how those dollars might still affect South Carolina’s economy, though, it’s a question of when they will be spent.

And there are plenty of places to spend.

“We see most of the damage in the Midlands and in Charleston, but approximately half of all of South Carolina’s 46 counties had some sort of damage associated with the flood,” Von Nessen says. “We are going to see unambiguous losses in wealth as a result because there were a lot of uninsured individuals who were affected that are not being reimbursed for any damages. In many cases property is going unrepaired altogether.”

The overall reduction in net wealth should, however, be accompanied by a stimulus to the economy, the economists believe, at least in the short run. After Hurrican Hugo in 1989, for example, economic activity ramped up, Von Nessen says, and he and Woodward are seeing some of the same in the early data from the recent flooding.

“Usually in natural disasters like these, you see a stimulus in two sectors. One is construction because damaged infrastructure is repaired and firms are brought in to do that work,” he says. “But we also are tentatively seeing a boost in retail activity as well, and a lot of that is housing-related goods and services.”

One specific example of the stimulus that they expect to see in the final analysis is an increase in hiring.

That kind of economic bonus is nice in the short term, but is expected to be followed by an eventual downside, Von Nessen adds.

“It is a stimulus, but I think it would also be appropriate to think of it as almost a mini-bubble,” he says. “Many of the repairs are to damaged property that in some cases needed renovations anyway, repairs that people may have been looking to make down the road.

“So in a sense we see a borrowed future demand: you see a bump up, a short-term stimulus, and then a bump down, below the long-term averages, later on.”