After the Flood: Weathering the storm 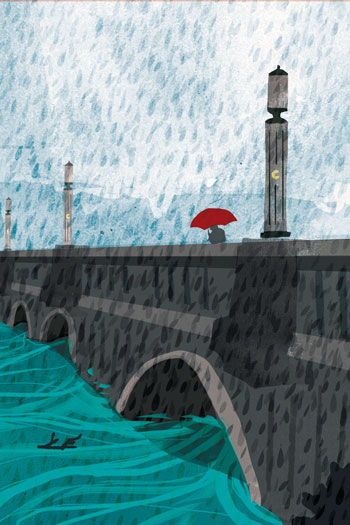 One of the most scientifically important marine ecosystems in the world got a desalinizing wallop from last fall’s deluge: The creeks of the North Inlet of Winyah Bay had low-tide salt concentrations drop to levels never before seen in 34 years of measurement.

Since then, researchers at the Belle W. Baruch Institute for Marine and Coastal Sciences have stepped up their monitoring of the North Inlet’s salt marsh, looking for signs that the freshwater inundation might have fundamentally changed the estuary.

With funding from the S.C. Flood initiative, the Baruch Marine Field Laboratory has augmented existing monitoring stations and collected samples more frequently to assess population changes in shrimp, crabs, fish, plankton and microbes dwelling in the estuary. Baruch researchers found that in the days and weeks soon after the flooding that the altered estuary provided ideal conditions for some new visitors.

“We saw a number of species of fish and at least one shrimp that were records for North Inlet. They had never been seen there before,” says Dennis Allen, co-director of the field laboratory. “They include channel catfish, white perch, white catfish, juvenile herrings and shads — organisms that are much more typical of the rivers.”

The low-salinity waters at low tide that were hospitable to those more freshwater-oriented newcomers did return to normal saltiness by mid-to-late October 2015, but the effects of the deluge were far from over, Allen says. A wet El Nino winter followed, and several storm systems — though each released considerably less precipitation than the original flooding event — caused salt levels to repeatedly crash, with extremely low readings still being recorded into March 2016, some seven months after the initial deluge.

“Normally there wouldn’t have been much of a signal in terms of salinity depression,” Allen says, “but because of the October flood the soils throughout the watershed were so saturated that almost anything that hit the ground ran off.”

By April, salinity levels had returned to what scientists deemed normal, and they turned their focus to the question of whether the flooding event might have caused long-term changes in the estuary. Early returns indicate otherwise.

“Pending the full analysis, I think what we’ve seen here was a short and intense perturbation, but one that was not enough to reset the system at a different level of organization or function,” Allen says. “So it was a shock to the system, but it appears to have recovered, and at least is on its way to returning to what we recognize as typical over the past 35 years.

“I guess the good news for North Inlet is, it weathered the storm.”