It’s all about the kids

If you’ve ever talked to a teacher working in a struggling school, you’ve likely heard the frustration in his or her voice — basic supplies are scarce, kids are acting up in class, administrators are tolerating, or maybe even fostering, a dysfunctional culture. Not surprisingly, some teachers decide they can’t work under such conditions, and they move on to another school or leave the profession entirely. 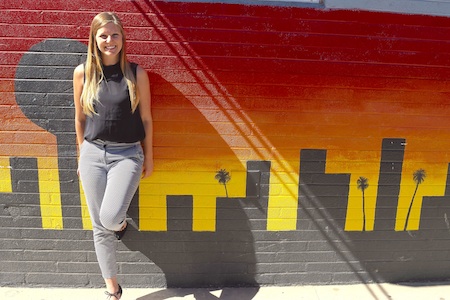 Kari Croft, a 2009 alumna of the University of South Carolina, has received a $10 million grant to establish a charter school in Los Angeles that will serve students who are homeless, in foster care or facing other challenges that make it difficult for them to attend traditional schools.

Then there are teachers like Kari Croft, who has instead decided to stake her career on helping children in difficult circumstances.

“The kids don’t get to pack up and go to a different district,” says Croft, a 2009 alumna of the University of South Carolina. “That is not a privilege or option that they have.”

Croft  — who earned her bachelor’s degree in English and went on to earn a master’s from the Harvard University School of Graduate Education — has recently been awarded a $10 million grant to start RISE High, a charter school in Los Angeles. The school will partner with social service agencies to serve students who are homeless, in foster care or facing other challenges that make it difficult for them to attend traditional schools. RISE will offer students classes and services at several locations, as well as flexible schedules. The grant, awarded by XQ: The Super School Project, is funded by Laurene Powell Jobs, the widow of Apple founder Steve Jobs.

“We designed it specifically to meet the needs of the students who have the most trouble accessing education because they are experiencing homelessness or are in the foster system,” Croft says. “The ultimate model is meeting the needs of lots of different students from lots of different backgrounds. Each student will have a personalized learning plan, and it will ask what they are interested in doing; what they want to study; do they need a job; do they need counseling; do they need legal services.”

The program is in a pilot stage now, with 25 students being served through a charter Da Vinci School in Los Angeles, where Croft has a fellowship. The plan is to officially open in August 2017 with between 75 and 125 students. Ultimately, Croft hopes the school will serve as a replicable model for districts facing similar challenges.

Croft’s interest in teaching goes back to her childhood experiences in rural Saluda, S.C., about 45 miles west of Columbia. Both of her parents were involved with kids, her mother as a school counselor and her father as a probation officer with the Department of Juvenile Justice. At school, she was a model student, graduating at the top of her 101-member class in the county’s only public high school.

“I had really strong English teachers the whole way through high school, and I went on to become an English teacher,” Croft says. “I attribute that to their classes and the way they pushed me.”

Not all of Croft’s high school experiences were quite as enriching as her English classes, though. When she got to college, she realized that some aspects of her education had been lacking. “We had some teachers who were really great and were there the whole time, and we had others who kind of rotated in and out; it was hard to get some teachers to stay for the whole year,” Croft says. “That created some gaps that I had when I got to my first year at USC.”

“The kids don’t get to pack up and go to a different district. That is not a privilege or option that they have.”

The sheer size of USC was a big adjustment for Croft; she had to get used to approaching professors when class sizes were sometimes much larger than what she was used to. Intellectually, Carolina was a new experience, too.

“USC pushed me more with critical thinking, so that took some work and some adjustment,” Croft recalls.

Whatever deficits she might have had, Croft overcame them and then some. Since she left Carolina, she’s gone on to excel in numerous teaching and leadership environments. Her first teaching job in 2010-12, straight out of college, was in East L.A. in an area struggling with low resources and high teacher turnover. The position came about through her involvement in the nonprofit teacher recruitment organization Teach for America; she had specifically requested to be placed in a large city with a sizable Spanish-speaking population.

“We got to rank the regions we were interested in, and I realized that I loved traveling and exploring new places,” Croft says. “Also, I had minored in Spanish and wanted to be able to use that in the classroom.”

East L.A. fit the bill for what Croft was looking for — but it wouldn’t have been a fit for everyone.

“It would be considered a low-income neighborhood,” she says of the area around the Media Arts & Entertainment Design Academy. “Schools throughout East L.A. have educational inequities; it’s hard to get qualified teachers to stay. Even the facilities are very different in East L.A. versus Beverly Hills or other areas.”

Instead of looking to find her way out, Croft set herself on a path that would help her eventually return and try to turn the tide as a leader in school transformation. After teaching in Los Angeles for two years, she returned to teach in South Carolina for a year, worked in L.A. again as a director of school operations for Teach for America, earned her master’s from the Harvard University School of Graduate Education — and eventually found her way back to L.A., where she is now a Da Vinci Fellow and the founding principal of RISE High.

Through it all, she has never forgotten the kids she wants to help.

“The kids were incredibly hardworking and really wanted to learn and were really brilliant,” Croft remembers. “That’s why I fell in love with teaching.”

But it’s not merely a sense of obligation that has called Croft back to L.A.; it’s also exactly where she wants to be. At Harvard and as a Da Vinci fellow, she has developed and begun to test the ideas that will help her make the leap from teaching in the classroom to impacting the classroom from a position of leadership.

“On the education side of things, L.A. was in a spot where lots of teachers were leaving, there were budget cuts, and the area I was in had one of the lowest per-pupil funding levels,” she says. “So, when thinking about resources and how those are used, it just presented a deeper challenge. Those were things I was thinking about.”

She also knew how much she cared about the kids.

“I taught them and I loved them and I wanted to be around them,” she says. “They care about their communities and about others who experience similar challenges. They are ready to start something different — and it is really a privilege that I get to do this work with them.”