Fashion lovers everywhere dream of being able to go to New York Fashion Week, but being a student intern working it is a once-in-a-lifetime experience. Courtney Sterns, senior public relations student, got to spend Sept. 6-14 working for PR Consulting’s fashion department during New York Fashion Week. This opportunity even gave her a chance to go back home during her internship.

“I’m from New York. I don’t live in the city. I live outside the city, but I’ve grown up next to it. I love it so much. I want to move back after I graduate, so it was nice to go back for a week and a half and get to be in the city,” says Sterns.

Sterns worked to help produce the fashion shows of clients like Altuzarra, Rag & Bone and Mansur Gavriel. Her tasks included sending out invitations, organizing seating charts, checking people in and making sure each show ran smoothly. The public relations firm also had to keep up with day-to-day responsibilities, so Sterns had to help get clothes to celebrities and magazines that would represent the brand of PR Consulting’s clients well. 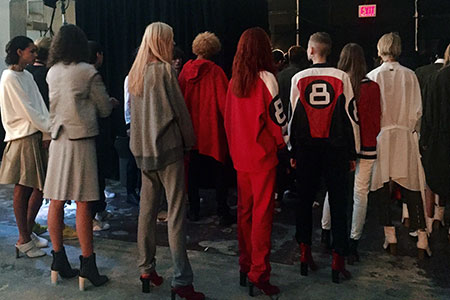 Sterns helped out backstage of the rag & bone fashion show during her internship.

“It was really cool to take a step back and see how it all comes together in the end and get to watch because I had no idea since I’ve never done anything like that before,” says Sterns. “The actual walking (during each fashion show) was less than five minutes. It was only a couple minutes. All this hard work that goes into just a couple minutes.”

Even though Stern’s internship was just over a week, it required long hours.

“I would be coming in at 9 in the morning and the shows were not till 9 at night, so there was a couple of really long days and working on Sundays. It was worth it and rewarding,” says Sterns.

During her long hours, Sterns even got to see celebrities.

“I got to work the Altuzarra show, and I got to stand and watch it. You’re still really close because it’s not huge and there are not that many people there. I’m a big Quantico fan, and Priyanka Chopra was there. And there was actually a picture that I found where I’m in the background of it looking off all dopey to the side, and she’s looking gorgeous. So getting to see some celebrities was cool,” says Sterns.

She also experienced the fast pace and multitasking required for public relations.

“I’m a PR major but I’ve never had a PR internship. I’ve only done marketing and editorial stuff so it is different from marketing,” she says. “So that was cool to see. It wasn’t pitching ideas really it was more of just trying to get that publicity and all that promotion out there.”

She even got to team up with some hardworking, creative people who gave her some connections through this internship.

Sterns says networking is the reason she was able to work New York Fashion Week. She interned at Momentum Worldwide, Marie Claire and Cosmopolitan. At her previous internship at Cosmopolitan, Sterns’ supervisor knew someone who worked at PR Consulting. Stern’s supervisor gave Stern’s resume to her connection at PR Consulting to possibly work fashion week, and Stern got the internship.

After the internship, Sterns hopes to move back to New York after college and is thinking about the kind of place she would like to work after her spring graduation.

“I like working in a creative space that’s casual, not like a strict rigid place. All those places were super creative and innovative and the people were awesome, so I guess that’s what I’m looking for at graduation,” says Sterns.