The class assignment that morphed into legislation

Most school assignments get turned in for a grade and are soon forgotten. But the speech Gweneth Gough wrote for a class at the University of South Carolina became the foundation for new legislation recently signed by the governor.

Gough’s speech, written for an English class taught by Jason Williamson, focused on ways to lessen the stigma surrounding mental health on college campuses, an issue the Summerville, S.C., native takes personally after having lost several friends and classmates to suicide and struggling with depression herself. 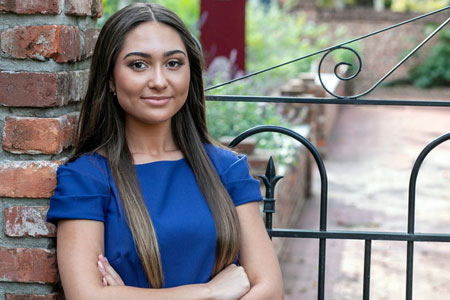 A speech Gweneth Gough wrote for a class assignment became the foundation for new legislation that calls for mental health education in 7th and 9th grade..

Gough shared her speech with state Rep. J.A. Moore (D-Berkeley and Charleston counties), who suggested they meet to draft language for legislative bills on the topic, adapting it to the needs of middle and high school students. What emerged was a bill entitled the Health Education Act, which calls for mental health instruction in health classes for 7th and 9th graders. Gov. Henry McMaster signed the bill into law earlier this fall.

It's going to bring the realization to a lot of kids that this is something that is real and serious. And it's not something that they have to deal with alone.

Gough says her own junior high and high school experiences would have been better if such courses had been mandated.

“I think it would have made the school itself a lot more of an inclusive environment. I feel like people would have talked to each other more whenever they felt like they were struggling,” Gough says. “It’s not something that is taught or that people have talked about in high school and middle school, but with the Health Education Act in place, it's going to bring the realization to a lot of kids that this is something that is real and serious. And it's not something that they have to deal with alone.”

The ongoing pandemic has exacerbated the problem for many students, Gough says, by decreasing social contact and intensifying feelings of isolation.

“If you're living at home and you live in a bad household, you aren't leaving — you're pretty much stuck there,” she says. “And nobody is going out and socializing either. So everyone's kind of feeling isolated, and I think that's why we're also seeing a spike in suicides.”

Gough hopes to use her degree in public relations from the School of Journalism and Mass Communications to advance the push for improved mental health resources.

“I would like to be a lobbyist, working towards the betterment of mental health, not only for schools but for society as a whole.”