The detective of Southern cuisine

David Shields is an important figure in Southern food culture, but his culinary identity was initially formed in Japan. 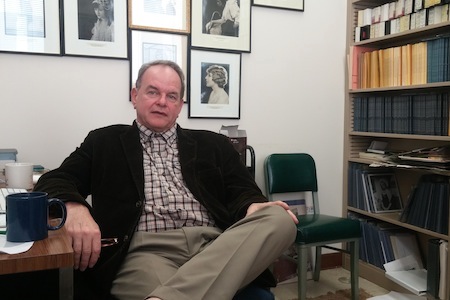 To understand 19th-century Southern crops, David Shields devoted himself to reading old agriculture journals. “When I came out after three years of reading these things, I had a list of the most important ingredients, and I knew why they were there and how they interacted with one another.”

Shields — a Carolina distinguished professor in the department of English language and literature, author of “Southern Provisions: The Creation and Revival of a Cuisine” and a recent recipient of the Keeper of the Flame award from the Southern Foodways Alliance — spent about five years living in Japan, beginning before his first birthday. It was the early 1950s, and his father was stationed there with the CIA. Japan was just beginning to recover from massive food shortages it had suffered during World War II. To the extent that it was available, many people ate a subsistence diet of traditional Japanese staples: rice, soybeans, tofu, miso soup. Even by 1955, the average Japanese citizen ate only 2.4 pounds of meat per year — and an extravagance such as sugar was nowhere to be found.

So it came as a shock to the system when Shields returned to the United States, where processed foods were on the rise and Sugar Frosted Flakes had recently hit the market. “I tasted that stuff and just had whiplash,” Shields says. Growing up in Maryland, Shields describes his post-Japan diet as “cosmopolitan food that people in the East ate,” as well as some of the convenience foods that were coming to dominate American grocery shelves. It wasn’t until he got to college at William & Mary that he discovered what would become his culinary passion.

“American mass food tasted very alien to me, and it was only when I tasted Southern food, when I got off to college in Virginia, that I tasted something that had an equivalent integrity to the Japanese food that was sort of my standard of taste,” Shields says. “That’s what got me interested in Southern food.”

In a far-reaching career that has seen Shields cover everything from the early history of the American book to the history of silent motion picture photographers, Southern food has become an enduring theme. Over the past 13 years, Shields has become a one-man culinary detective team working to understand the crops that first brought Southern cuisine to worldwide acclaim in the 19th century — and to bring them back.

Around the turn of the 21st century, popular interest in regional food cultures had led to attention being paid to Lowcountry cuisine. Unfortunately, Shields says, “the type of history that was being advanced was so cockamamie — you know, stuff that had been passed down with no documentation whatsoever — and this irritated my rather tidy soul.” Shields tackled the problem head-on by organizing a conference in Charleston in 2003 on the cuisines of the Lowcountry and the Caribbean. It was there that Shields met Glenn Roberts from Anson Mills, a Columbia-based producer of organic heirloom grains. Knowing Shields’ interest in Southern food and his research skills, Roberts asked for help identifying and bringing back long-gone staples of the Southern diet.

“He came up to me and said, ‘People like to pretend that what they are eating here in town is a cuisine — they’ve got all these recipe books like “Charleston Receipts.” But all they have is the formula, and the original ingredients that made the thing taste good are gone.’”

American mass food tasted very alien to me, and it was only when I tasted Southern food ... that I tasted something that had an equivalent integrity to the Japanese food that was sort of my standard of taste.

It was true. Carolina Gold Rice — a delicate rice with a clean, sweet flavor and intricate starch qualities — had virtually disappeared, replaced by convenience rices like Uncle Ben’s that were easy to cook but lacking in flavor.

“All of those one-pot meals that you think of in terms of Southern food — like jambalaya, shrimp creole, purloo, hoppin’ John, chicken bog — for all of those dishes, Carolina Gold is the ideal rice,” Shields says. “It has an extraordinary starch bloom that enables flavors to meld onto it — it holds its flavors. And it tastes wholesome, too.” Similarly, the norm for hoppin’ John had become California black-eyed peas, whereas Shields discovered that the dish had traditionally been made with Sea Island Red Peas.

“I ended up spending three years in the Thomas Cooper Library reading early 19th-century ag journals: the agriculture of the 1820s, '30s and '40s, Justus Liebig’s ‘Agricultural Chemistry,’ all of the books on early crop rotation,” Shields says. “I was trying to understand the botany of the mid-19th century to get their theories of why this plant has to go with this one,” he says. And it worked: “When I came out after three years of reading these things, I had a list of the most important ingredients, and I knew why they were there and how they interacted with one another.” 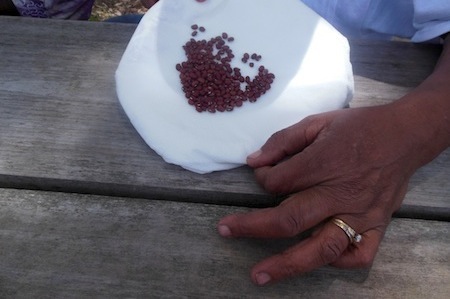 One of the crops Shields has helped revive is the Sea Island Red Pea, traditionally used in hoppin' John.

More than a decade later, Shields works regularly with geneticists, scholars, farmers and food producers throughout the world to discover and revive long-forgotten Southern crops. Among the many crops he has helped to bring back are Carolina Gold Rice, Benne (now called sesame), Sea Island White Flint Corn, Purple Ribbon Sugarcane, Hicks Everbearing Mulberry and Carolina African Runner Peanuts. He chairs the Carolina Gold Rice Foundation. He has been quoted in The New York Times and profiled in Garden & Gun. He writes and narrates an animated segment on the PBS show “Mind of a Chef”; one episode delves into the history of the legendary Bradford watermelon, which Shields helped revive by tracking down Nat Bradford, an eighth-generation farmer in Sumter.

In its October announcement of the Keeper of the Flame award, the Southern Foodways Alliance praised Shields for his humility, passion and dedication to the region and its farmers. Shields appreciates the recognition, but there’s another benefit his work brings, too.

“There is a kind of gratification to eating your work, particularly because it tastes better than other stuff,” he says.