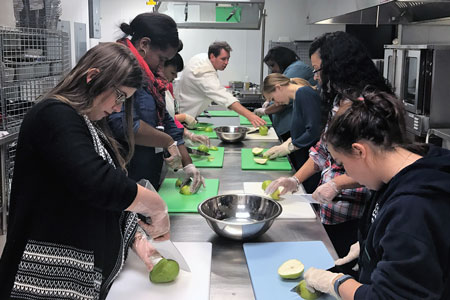 Many of us share the memory from school days gone by: a glob of something that might be carrots one day, a heap of something green the next, unceremoniously plopped into a compartment of our school lunch trays and then avoided at all costs. The University of South Carolina is working with several state agencies to end that unpleasant tradition and make the lunches healthier and tastier.

"I'll never buy into the idea that kids don't eat vegetables. It's how you present it to them," said Bill Knapp. Knapp, an executive chef and instructor at USC’s College of Hospitality, Retail and Sport Management (HRSM), also leads seminars designed to teach school food preparers how to incorporate fresh, locally grown fruits and vegetables into their menus in ways that appeal to their audience.

"We're changing the teachers and the chefs and the managers, their frame of mind,” she said. “Then we get to the kids and the parents and we might make some headway."

Knapp said the school staff members he teaches are open to the idea of fresh, healthy menu items, but in many cases do not know how to go about incorporating them into menus.

"It's really easy for these school systems to say ‘We want to have local food and we want to have everything fresh,’ but the reality is they still have to put out 1,000 meals by 10:30," Knapp said, giving an example of the challenge cafeteria staffs face and noting that opening a bag of frozen vegetables is easier than preparing fresh ones. "You want to switch to the whole foods, but someone has to be able to cook it."

Knapp, who leads around 10 seminars each year with school staff members from all over the state, said he finds many (if not most) struggle with not only lack of training, but also lack of equipment. "The staffs are not trained. They've never cut 25 pounds of peppers,” he said. "We're literally going into their kitchens and they have one knife."

Farm to Institution hopes to overcome those problems from the supply side, and part of Knapp’s seminar agenda focuses on where to get fresh food and how to make it cost effective. The majority of the seminars, however, is a hands-on experience in which the school employees prepare food with guidance from Knapp and other HRSM faculty and staff like Walter Jackson.

"I think a lot of people think 'We can't do this. It would take too much time,'” DiPietro said. “Then Bill goes and does his thing and in those three hours they not only learn the skills they need but also prep eight different things."

At the most recent seminar, preschool staff did just that, preparing sample-sized versions of eight meals to take back to their schools for others to sample and learning that it can be done.

"We're trying to make everything as easy as we can make it,” Knapp said. "We're still kind of in the infancy of the program. We're building infrastructure… If we can get one thing that's relatively easy to prep and get that on the trays [each] week, that's great."

Knapp said many states which have similar programs do not include preschools, but he and others in the South Carolina program believe building good habits early for cooks and for the students who eat the food is crucial to eliminating the notion that veggies are something to dread.

"That's the hope,” he said. “That it's 'We're used to having this' as opposed to 'That's the compartment of the tray we hate.' "