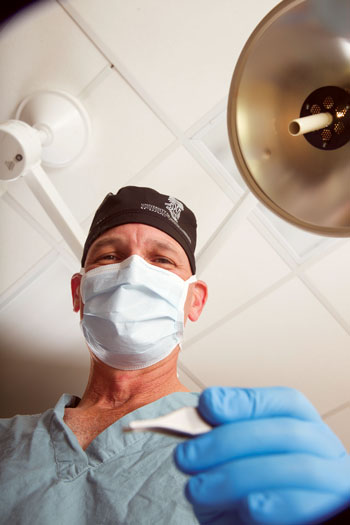 “As physicians we need to be thinking of new ways to do things. Sometimes that’s hard because we have to let go of what we’re comfortable with.” — Daniel Clair, chair of the surgery department at UofSC School of Medicine.

After years of struggling, the dentist was at the end of his rope. He was suffering from chronic deep-venous obstructive disease, a painful condition that caused his left leg to swell and cramp after minimal time on his feet.

“This was a guy who could walk around his office but that was about it,” says Daniel Clair, M.D., new chair of the surgery department at the University of South Carolina School of Medicine and the Palmetto Health-USC Medical Group.

Clair used a technique that involved placing stents inside the compressed vein to improve blood flow. A year later, the dentist was able not only to walk without pain but to run a 10k race. “So you can imagine how dramatically different his life was,” Clair says.

Clair joined the School of Medicine earlier this year from the Cleveland Clinic, where he had been chair of vascular surgery for a decade. He has contributed to the patenting and development of several surgical devices and was the clinic’s teacher of the year three times. Clair now brings his expertise in vascular surgery to S.C.

"We are very privileged to have a physician of Dr. Clair's stature join us,” says Les Hall, M.D., executive dean of the School of Medicine and CEO of the Palmetto Health-USC Medical Group. “His proven leadership skills, surgical expertise and passion for education will greatly benefit clinical care and the educational community in the Midlands."

Clair succeeds James Nottingham, M.D., who was interim department chair since June 2014 while concurrently serving as the surgery residency program director. Under Nottingham’s leadership, the residency program has been strengthened and additional surgeons recruited.

The seventh of 16 children, Clair grew up in New Jersey just outside New York City. He played football and was on the track team at Hamilton College in Upstate New York before heading to the University of Virginia School of Medicine.

A military scholarship for medical school allowed Clair to complete his residency and pursue a subspecialty in vascular surgery before fulfilling his service obligation in the U.S. Air Force.

During his military service, he was chief of vascular surgery at Andrews Air Force Base Hospital.

“It’s a great place to start a career because it’s not as busy as most practices outside the military,” Clair says. “I started doing minimally invasive procedures while I was in the military.”

“We are starting the ‘Star Trek’ era of treatments that allow us to do things that, if you had asked a physician 50 years ago, they would have said there is no way that can happen,” he says.

Clair has worked on a patented device, still under development, to treat aneurysms and another one called the tumescence delivery device that sends fluid into the space surrounding a vein in preparation for a laser or radiofrequency vein procedure. The device enables shorter procedure times and increased patient comfort.

The neat thing about vascular surgery is that advances are coming extremely rapidly.

Daniel Clair, new chair of the surgery department at the University of South Carolina School of Medicine

I am able to say to some patients, ‘If you wait a year or two, we have a technology that is in trial that might be available for you.’ ”

Treating patients is just part of Clair’s new role at the School of Medicine. He also teaches surgical residents and students on surgical rotations and will advise students who are interested in surgery.

“We all as clinicians stand upon the shoulders of those we trained with,” he says. “They pointed out problems to avoid, and it is our responsibility to carry those messages and what we’ve learned forward to provide the public with physicians who are better at their start than I was at mine and who will ultimately be better doctors at the end of their training than I was at the end of mine.”

Clair arrived in Columbia this past April and already has made quite an impact.

“Probably the first 15 to 20 percent of my patients were employees at the hospital here who had chronic venous occlusal problems that could not be treated otherwise,” Clair says. “Treatment used to be a big open surgery to reposition the vein. Now it is done with stents as an outpatient procedure, and people can resume normal activity pretty quickly.

“As physicians we need to be thinking of new ways to do things. Sometimes that’s hard because we have to let go of what we’re comfortable with.”

Moving to Columbia was just such a step outside of the comfort zone for Clair and his wife, who is a professional organizer. Patty Clair helps clients, especially those who are downsizing, through her business, Simply Put.

“She is really good at what she does,” Daniel Clair says. “I have a good 2-foot square at home that I can leave disorganized.”

The couple met at Hamilton College, where Patty Clair majored in psychology and English. She worked in communications, then focused on raising the couple’s four children, one of whom is an orthopedic resident at New York University.

Part of the attraction of Columbia was that one of the couple’s daughters lives here, and a son (a Carolina graduate) lives in Charlotte, N.C.

When he isn’t in the operating room or the classroom, Clair enjoys reading, playing golf “miserably” and exercising to improve his health.

“I talk to patients about regular exercise, aerobic and resistance, which builds muscle,” Clair says. “About five years ago, I was telling patients to do that, but I was not doing it. I wanted to actually live my recommendations.”

He began with a 10-minute daily resistance training program that now is at 15-20 minutes a day. He says he has seen the benefits in improved good cholesterol levels and lower bad cholesterol.

“We are role models for our patients in many ways,” he says. “One is the life we lead and the image we project to them. I really believe we need to live what we are asking them to do, and if we can’t, maybe we need to look at what we’re recommending — maybe it’s not reasonable.”