Why is Mona Lisa smiling? Or is it a smirk? If the Leonard Da Vinci masterpiece came to life, what would she say?

Part of the attraction of art is that different audiences can have different interpretations. There are many theories as to what Auguste Rodin's "The Thinker" is thinking of or why Edvard Munch's "The Scream" is screaming. And, what's up with the pitchfork in Grant Wood's "American Gothic?"

It was questions like these that inspired composer John Musto and librettist Mark Campbell to come up with their own interpretations of five paintings by American realist Edward Hopper and create the opera "Later the Same Evening," the latest production for Opera at USC.

It was their storytelling device that Ellen Schlaefer, director of opera studies at Carolina, found fascinating enough to include in this season's opera lineup.

"I think it's important for music students, especially opera students to understand where their stories come from," Schlaefer says. 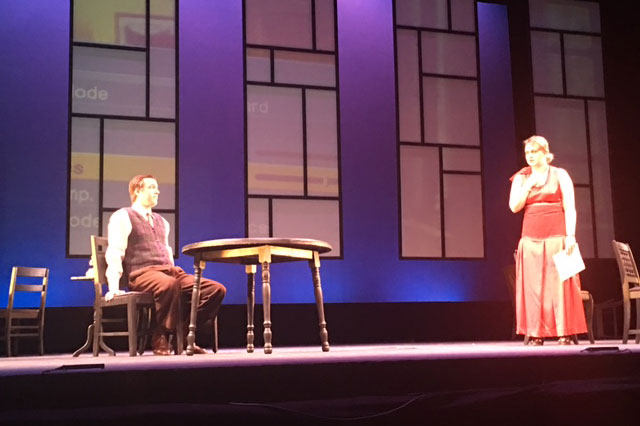 As each painting, "Room in New York," "Hotel Window," "Hotel Room," "Two by the Aisle" and "Automat" comes to life, the characters are depicted preparing to attend the same Broadway musical. The subjects — a widow, a new wife, a dancer, a young man, an old Jewish couple and an Italian woman — interact and the story imagines what happens before, during and after the show.

The paintings are incorporated into the production through large screen projection.

Hopper's most famous painting, "Nighthawks," features a vignette with three males in a diner. Schlaefer only can speculate that the opera's creators intentionally left it out so as to have a balance of female and male characters.

"Our season this year is how opera looks at art," Schlaefer says.

She says "Later the Same Evening" is a perfect companion to Opera at USC's fall production of Stephen Sondheim's "Sunday in the Park with George," which is based on how George Seurat created his most famous painting.

Both shows were written in the past 35 years. Schlaefer says these recent productions help in her mission to introduce the 500-year genre of opera to a new generation.

Art history professor Bradford Collins will present a free lecture on the life and work of Edward Hopper at 6:30 p.m. prior to the Friday and Saturday performances in Wardlaw College Room 126.