Fake news. You’ve heard about it, consumed it, probably even believed it — at least on occasion. And if, like 92 percent of American adults, you’re on Facebook or Twitter, you’ve quite possibly helped pass it along.* But what is it? Why does it exist? How do we combat it and why can’t it just go away? USC Times invited to lunch two faculty members — David Lankes, director of the School of Library and Information Science, and Ernest Wiggins, associate professor in the School of Journalism — and alumnus Taylor Smith, a journalism and law school grad who serves as the attorney for the South Carolina Press Association. We asked our esteemed panel to discuss this most vexing of 21st century media problems — the rampant spread of fake news, clickbait profiteering and outright propaganda.

So let’s start at the beginning. What is “fake news”? 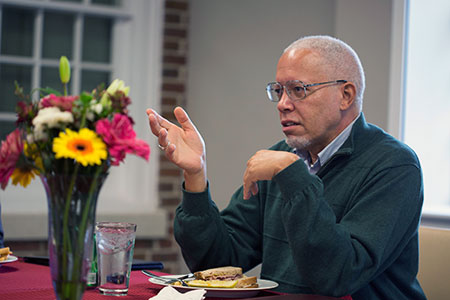 “You have The Onion, you have Andy Borowitz doing his thing and it’s the sharing of the excerpt from The Onion story or from the Borowitz column that is where the real mischief can happen. Because if it’s not cited as being an Onion piece and it makes it halfway across the internet universe as fact, then there is a lot of potential damage that has been done to public discourse or to policy.” — Ernest Wiggins, associate professor, School of Journalism and Mass Communications

Ernest: I think it’s interesting that when you introduce the topic, you put air quotes around fake news. I think that’s because people are questioning the use of the term, because maybe they want to be ironic or because — and this is my perspective — the term “fake news” doesn’t get to what we’re talking about. I mean, “fake news” has always been around. When you got to the grocery checkout line, whether it was the bat boy or space abduction, there was the fake news. But, it was clearly identifiable because of its placement, because of the content. It was clear that it wasn’t to be taken seriously.

So is this new profit model at the root of the problem?

David: Well, no. I mean, whether you’re getting clicks or you’re getting money from subscriptions, the profit model is not different. The ethic behind the profit model may be slightly different. You can either characterize fake news by intent or you can characterize it by form. Intent is purposeful misinformation. The form, I think, is what people are responding to. Fake news conforms and adopts traditional markers of press or media, and so it uses things that look like, feel like, are reported like what we’re used to seeing the press use, but they’re being used without regard for the veracity of the information.

Taylor: That’s a good point. It’s not necessarily always profit. The motives can be myriad.

Ernest: The outcomes are pretty self-serving whether it’s going to be money or changing someone’s vote. To the point of intent, and to the point of outcomes or consequences — and this is where we’re just pulling our hair out here — it could be that fake news is actually propaganda or fake news is actually something even more malevolent, like something that tries to destroy the republic.

And as consumers of information, we’re all complicit, right? 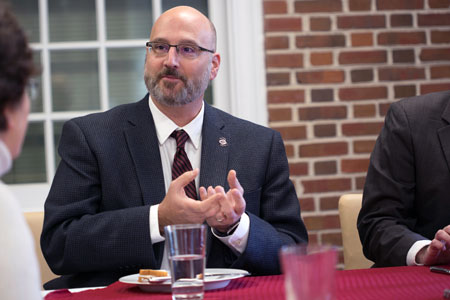 "A good answer to ‘fake news’ is not to make society less trusting and more skeptical. That doesn’t build common good, common understanding. I know what I don’t want to do is to teach my kids to think that everyone is out to get them.” — David Lankes, director School of Library and Information Science

David: There’s a great phrase that comes out of economics called “satisficing.” It’s the notion of how people satisfy their needs. What we know from people’s behavior is they will make a decision where they can minimize costs, which includes either money or their time or their effort, to maximize results. It’s human nature. We treat that like it’s laziness, but we all do it on a regular basis. My point about fake news is, the mechanisms we use to maximize our investment are changing. It used to be, “if I buy this newspaper, it is the easiest, least expensive investment to become informed.” What we’re seeing now is all of those wonderful tags we used to use — the indicators of “this is quality” or “this is a quick way to get good stuff" — those are disappearing. So it’s easy to get a tweet, to take the top result in a Google search, take what’s in my Facebook feed. I don’t have to put in a lot of effort. I get a lot of personal satisfaction from it. It agrees with my worldview. One of the things that drives me nuts in this whole discussion about fake news — particularly around the election — is that somehow people were either lazy or uneducated about how information is transmitted. If you really look at it, this was probably the most informed decision people had made. They were just using information they already agreed with. The failure wasn’t in getting information. The failure was not getting outside of what they expected to see.

How do we combat the human tendency to not believe things that fall outside our expectations? 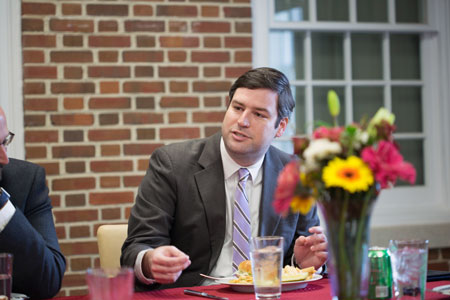 David: You can’t take someone who just totally disagrees with what you’re about to tell them and start by saying, “You’re wrong.” We know that in communication theory. You don’t start educating people by telling them that they’re stupid. You don’t start telling people that there’s a better way to do it, by telling them the way they’re doing it is wrong. You start with where they are, and you begin to bridge to where they want to go.

Ernest: It seems to me this is a question of trust. What do I mean by “I trust this source”? Is it that I trust that it is “unbiased,” that it’s going to be “fair and balanced,” that it’s someone who isn’t trying to manipulate me? Is the trust level down here with certain sources and fairly high with certain other sources? Does it flex? I think it does.

The Associated Press and other trusted news outlets are teaming up with Facebook to vet stories that have gone viral. Doesn’t all of that require the general public to appreciate that some sources are better than others?

David: Instead of saying “this is right and this is wrong,” the school librarian was there to teach information literacy, to teach, “There are good sites and bad sites.” And there was a real push to give the gold star. “The New York Times gets the gold star. The Wall Street Journal gets it. The National Enquirer doesn’t.” If you could begin to identify the network of trust, you could say, “This claim has gone through   this network, therefore I trust it.”

Taylor: If I were factcheck.org right now, I would be a little concerned about this partnership. In the sense that when they go about their fact-checking, usually, it’s a very narrow inquiry. If Facebook is going to start putting tags on something that’s “false,” it’s highly unlikely that every comma and period is somehow false within this story. I don’t know if this is going to be the panacea that people think it is in regards to social media. It’s going to create a paranoia. People are going to see that it may have only been a claim or two or three within the article that was false. To label the whole thing as false takes out some of the truthful information that may have been beneficial.

Ernest: Well, it’s going to have to be incremental, right? I mean, you have to start somewhere and then kind of build. If there’s any kind of learning going on here, and if the person that wrote the piece is educable, if the piece is labeled as being false in these particular places, then that person perhaps will process this tagging and do better as a practitioner of journalism. In addition to the consumer being alerted to the problems with the article, maybe, incrementally, over time, the journalist or the person who is creating these stories will get better. If they truly do want to be good journalists — and, of course, that’s a big if — and if the consumer, on their end, really wants to consume good information, then maybe they’ll learn as well.

I like how you believe that the false news is coming from people who want to be good journalists, but they are just falling short of the mark.

Ernest: Am I being Pollyannaish by assuming that some people out there who haven’t been schooled in journalism want to do it but just don’t know how to do it right? So maybe there’s one or two of those out there, and maybe the great majority are sick, malevolent people who want to destroy society…

Or make a buck.

Ernest: Or make a buck, yeah.

Taylor: The one thing that journalists do that maybe we’re not doing a good job with now in education, before they even get to college, is critical thinking. I think right now we’re already at this point where fake news is proliferating everywhere on social media. You can’t trust your friends. That paranoid thing is already there. So I’m just asking us to become more skeptical, but not [to become] skeptics yet. Maybe if they could just adopt critical thinking, step back from why they want to trust this and say, “Why should I trust this?”

Ernest: I’m wondering, in the end, is fake news going to die a natural death — much like maybe Twitter or something?

Ernest: Well — wish it, and maybe it will come true. There is something that is going to get into it and destroy it from within. If the skepticism gets viral, then there will be no clicks anywhere because no one will believe anything that they don’t see themselves, and even then, we might have some problems. If skepticism gets to our core, and nothing that we see on television or read has any impact because we don’t believe any of it, that will be the death of fake news. Of course, that will also be the death of society.

This story originally appeared in the USC Times February issue. Look for the latest issue in your mailbox or online.