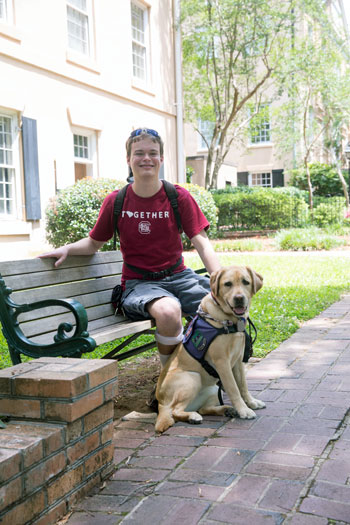 Jory Fleming is the most decorated undergraduate scholar in USC history, having been named a Rhodes Scholar, Truman Scholar, Goldwater Scholar and Hollings Scholar.

For most people, being named a recipient of the world’s most highly recognized academic scholarship would be a shout-it-from-the-rooftop moment. The kind of thing to share with anyone standing within, oh, a half-mile or so.

When Jory Fleming finished his interview for the Rhodes Scholarship, he haphazardly sent a text to his mom that he was done and ready to be picked up. Then, almost as an afterthought, he sent a second text: “I won.”

The 10th Rhodes Scholar in USC’s history is modest, it’s true. But he’s also not like most people — since birth, he’s learned to overcome various disabilities, including autism.

“It is like English is a second language for him,” his mother, Kelly Fleming, says. “He still has his issues. He still needs some social conversations translated for him.”

But Jory credits his mother’s help with preparing for college and his time at Carolina with overcoming those challenges.

When her son was 2, Kelly, who had completed medical school, chose to give up a career in medicine to give Jory the extra attention he needed.

“She has definitely sacrificed a lot to provide what I needed to help with the challenges that I faced,” says Jory, who has two older brothers ­— a radiologist and a pharmacist — and a younger sister who is in college. “I have a better understanding now of what that entailed.”

His mom says she began to realize the extent of her son’s intelligence in his junior and senior years of high school. “Some stuff was so easy for him, he just didn’t like it,” she says. During his senior year, he took classes at USC to help him get a head start on the college experience.

“He didn’t want to get involved in much,” she says of that early exposure. “It is amazing now how much of a change it has been.”

Jory sees the change himself. “If you would have told me when I was a freshman that I would make a presentation to a class of 20 students as a University 101 peer leader to help them learn something or that I would read a book to a room full of elementary school kids, I wouldn’t have thought I could do it — I wouldn’t have wanted to do it,” he says. “But now, I am very glad that I pushed what I thought were my limits.”

One of the activities that Jory feels strongest about was Cocky’s Reading Express, which provides books and instills a love of reading in young schoolchildren. Jory worked with event logistics and was a student reader.

“I can really appreciate how that gave me the opportunity to help my community and helped me overcome some personal challenges,” Jory says.

Jory has met his academic challenges at Carolina with aplomb, earning a 4.0 GPA while majoring in geography and marine science, with a minor in geophysics. He attributes that, in part, to his ability to think in images and mentally conjure up study notes.

He also has been an avid participant in research, including working for the NOAA Office for Coastal Management as a Hollings research fellow. Jory helped create data visualizations to study sea level rise. Working with the National Park Service for the past year, he has helped improve spatial understanding of habitat for better fisheries management.

He is looking forward to new research this summer at Oxford, where he will pursue a master’s degree in the School of Geography and the Environment, studying human and social geography.

“It’s about how where you live impacts you and your day-to-day life,” he says. “You can’t really escape your environment.”

Jory has already discussed research opportunities with faculty members at Oxford and has talked with USC’s Rhodes Scholar from 17 years ago, Caroline Parler Potter, who is now a research officer at the Nuffield Department of Population Health at Oxford.

Kelly, who plans to complete her master’s in public health from the Arnold School of Public Health and graduate with her son in May, will stay with Jory during his time at Oxford. It is his mother’s support — and all the help he received at USC — that has led Jory to consider a career in public service.

“I consider public service to be working to make things better for everybody,” Jory says. “All of the mentors and family in my life have shown me the difference one person can make.”

For Kelly, it’s just another expression of what makes her son tick.

“He wants to find ways to communicate the science to people,” she says. “That’s a big part of him, trying to translate what he sees and hears into something he can understand.”

Jory Fleming discusses how he got Daisy and what his service dog has done for him. Read Daisy's story.