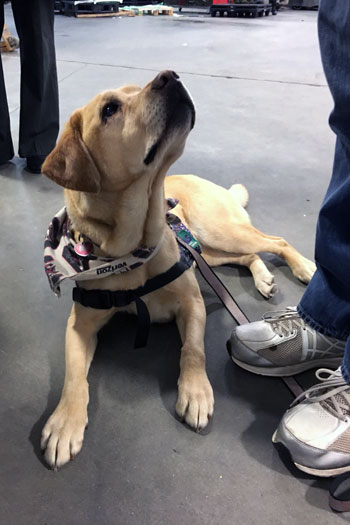 “She’s always looking up at me asking, ‘What’s next?’ ” — Jory Fleming, Rhodes Scholarship winner talking about his service dog Daisy

Rhodes Scholarship winner Jory Fleming says he is probably best known on Carolina’s campus as the student with Daisy. Since he first set foot on campus, Fleming has been accompanied by the yellow lab, who helps him with social challenges associated with autism.

The pup remains calm whether walking amongst a throng of students on their way to class or sitting in the student section of Williams-Brice with “Sandstorm” blaring over the loudspeakers.

“She just stays calm and relaxed in all environments,” Fleming says. “She was definitely the right fit for me in terms of personality.”

Daisy was initially trained by a breeder to be a service dog for soldiers in Afghanistan. When she was not needed for that task, the breeder donated Daisy to Palmetto Animal Assisted Life Services, where she was adopted by a local Girl Scout troop and given her floral name.

When Fleming worked with PAALS to find the dog he would use to navigate USC’s sprawling Columbia campus after being home-schooled, he worked with several animals before the PAALS folks settled on Daisy as his four-footed companion.

The two then underwent an intensive workout with PAALS trainers.

“It was like boot camp,” Fleming says. “But now, we have a real bond.”

Fleming’s mother, Kelly, says her son initially was wary of getting a dog because he didn’t want the attention. “But he realized it would give him more independence,” Kelly Fleming says. “She is trained to be calming to him. She can recognize when he’s having difficulties.”

Jory agrees. “It changes a lot of things,” he says. “I didn’t fly before Daisy.”

Daisy also has been an icebreaker of sorts for the young man who naturally shies away from social interactions with other people.

“When I started, I was less inclined to pursue those interactions. Doing small talk is difficult for me,” he says. “But people would approach me and I got to practice my interpersonal communications. A lot of people know me as Daisy’s owner and I like that sometimes. It’s easier to interact with students because it’s often about Daisy.”

Daisy is 5 years old and has been with Fleming since summer 2013. She will travel to Oxford this summer when he goes to England to study for his master’s degree in geography.

One major issue the pair will face is simply crossing the street, he says. “We will have to look the opposite way over there.”

Whichever way the traffic is flowing, it is a safe bet that Daisy will be looking up at Fleming to see where they are going next.