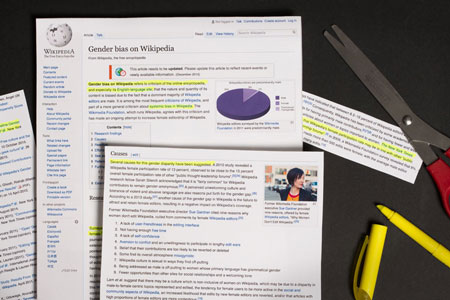 How often do you visit Wikipedia? Don’t lie, and don’t round down. There’s no shame in it anymore. At this point, the collaborative online encyclopedia is pretty much a go-to reference resource — used by just about everybody with an internet connection, including academics.

Take Susan Felleman. The University of South Carolina art history and film and media studies professor doesn’t just use Wikipedia as a scholar and professor. She has also assigned students to create Wikipedia articles, has authored articles of her own and is a co-organizer (with School of Visual Art and Design colleagues Evan Meaney, Amanda Wangwright and others) of “An Entry of Her Own: UofSC’s 2017 Wikipedia Edit-a-thon.”

The event, now in its second year, encourages women and members of other under-represented populations to become Wikipedia contributors by providing a forum, technical support and insights into the Wikipedia culture. It is part of the international Art + Feminism edit-a-thon campaign, which has promoted similar events at more than 70 venues in 17 countries since 2014.

“Wikipedia used to be the kind of thing that professors cautioned their students against using, but it has become an incredibly valuable resource, even at the academic level, partly because people in the academy have concluded that it’s in their interest to contribute articles,” says Felleman. “In order to be truly valuable, though, it has to be more equitable in terms of its representation.”

Bias is difficult to quantify, of course, but even Wikipedia acknowledges the gender gap. According to the Wikipedia article “Gender bias on Wikipedia,” a 2011Wikimedia survey concluded that 90 percent of Wikipedia editors were male.

“Wikipedia is a prime example of a structural echo-chamber, especially among its high-performance users. The edit-a-thon is an attempt to correct this systemic imbalance. Doing so will reinforce and diversify the Wiki-knowledge base, to the benefit of all.

“Certainly, there are contentious areas that are real battlegrounds, but that’s not really what’s happening with under-represented subjects,” says Felleman. “They’re just not there.”

And that’s precisely what edit-a-thon organizers hope to change, one entry at a time — and not just in terms of gender representation.

“Last year, two of us were offering courses related to women artists and feminism, so we had a lot of students who were actually working in relevant areas,” says Felleman. “But we encourage contributions about underrepresented populations in general, and really, anybody that doesn’t know how to edit and contribute to Wikipedia can come out and learn how to do it.”

“An Entry of Her Own: UofSC’s 2017 Wikipedia Edit-a-thon” will be held 1-4 p.m. Friday (March 17) in the third-floor multimedia classroom at Thomas Cooper Library. Registration is not required, but participants are encouraged to create a Wikipedia account ahead of time and bring a draft of an article to submit.