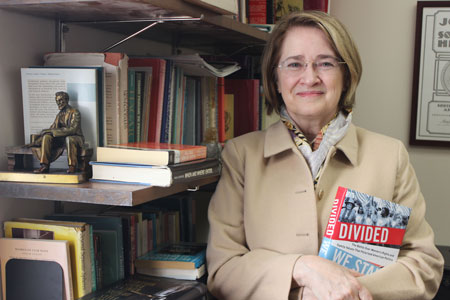 Forty years ago, women from every state congregated in Houston for an unprecedented National Women’s Conference, endorsing a wide range of goals including abortion rights, gay rights and the Equal Rights Amendment. At the same time in the same city, the conservative women’s movement rallied to protest federally funded feminism and to support a pro-family agenda.

The two groups have battled over social issues and politics ever since.

“We have a political crisis in this country and we need to figure out how we got here,” Spruill says. “We have a deeply polarized political culture that is bitterly partisan. After issues loaded with religious and moral significance reach center stage in the political arena, with the two parties taking different sides, consensus is impossible and compromise is not tolerated. That leads to political gridlock.”

Spruill’s own life has mirrored the women’s movement. As a freshman at the University of North Carolina at Chapel Hill in 1969, she was one of just 250 women in a class of 2,500. There she became active in the women’s rights movement and joined the National Women’s Political Caucus. When she moved to the University of Virginia for graduate school, there were no women on the history faculty, and even the field of women’s history was just beginning. She was teaching an early course in women’s history in the 1970s, while the fight over passage of the ERA was going on.

“When I was a young woman, doors were just opening. A group of women, a little older than I, broke down doors and I was able to come right behind them,” Spruill says. “I was conscious of the fact that things were changing and I know I was fortunate to come along when I did.”

Spruill, who joined the UofSC faculty in 2004, worked on the book for at least a dozen years, long before she knew the timing of its release would coincide with the campaign and defeat of Hillary Clinton, the first woman to be nominated for president by the Democratic Party. Her research was supported by the Radcliffe Institute for Advanced Study at Harvard University, the Woodrow Wilson International Center for Scholars and the National Endowment for the Humanities.

The book has gotten national attention, including a review in The New York Times. This week, she is in England, speaking about the book at the British Association for American Studies’ annual conference at Canterbury Christ Church University.

“It’s always a thrill, after years and years of working on a book alone in a quiet room, to have other people read and talk to you about it. That is thrilling,” she says. “Even more thrilling is people seem to like it.”

Some have said, ‘I never understood why conservative women were so opposed (to feminism). I don’t agree with them, but now I understand their point of view.’ It has also been gratifying that several conservative women have told me they were glad their story was finally being told.”

Understanding a person’s point of view is what Spruill says she tries to do with her writing, and with students in her class. “I want them to try to understand people’s thoughts and actions and why they did what they did. I want them to understand what makes people so passionate,” she says.

“I’m trying to shed light and not heat on issues where there has been way too much heat.”