Sarah Gehlert believed her work analyzing artifacts at an archeological dig in Peru would one day make a contribution to society. But while her studies were in the pre-Columbian period, her thoughts were in the present. 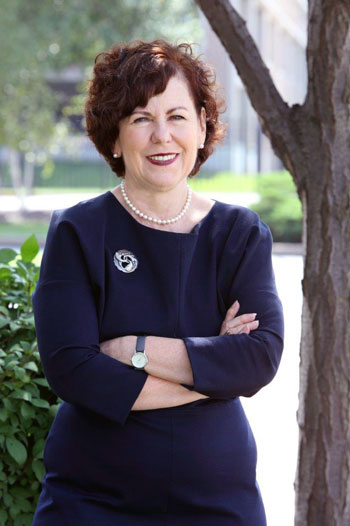 Sarah Gehlert has been named dean of the College of Social Work.

"My work was happening during a period of rapid social change in the United States, with new attention to the plight of racial and ethnic minorities and persons living in poverty," Gehlert says.

So she decided to return to the states and add graduate studies in social geography and social work to her background in biological anthropology. By combining the two disciplines, Gehlert thinks she has greater understanding and empathy for people in need.

Thirty years later, Gehlert was the E. Desmond Lee Professor of Racial and Ethnic Diversity at Washington University in St. Louis and has been named dean of the University of South Carolina College of Social Work by Provost Joan Gabel.

"Sarah's appointment comes at a time when we are further strengthening our university’s position as a state and regional leader in health science research and education," Gabel says. "I’m excited to have a scholar of her stature join the College of Social Work as it continues to make great strides in both research and direct community impact. Her dedication to working collaboratively to improve the health of society’s most vulnerable populations makes her an ideal fit for the position."

Gehlert begins at a time when the university has set into motion a bold health sciences initiative and greater collaboration between social work, nursing, pharmacy, public health, biomedical engineering and medicine.

Gehlert, who had a joint-appointment in Washington University's George Warren Brown School of Social Work and the School of Medicine, says collaborations between fields of study can produce greater results since healthcare providers treat the whole patient. Her research area includes studies on the effect unsafe and violent neighborhoods have on African American women diagnosed with breast cancer.

"I have become a strong advocate of approaching health through an encompassing lens," she says.

While she was a professor at the University of Chicago, Gehlert started a free clinic with a group of medical students. Many of the patients suffered from illnesses that could be traced back to social problems such as mental illness, substance abuse, substandard housing or criminal activity.

"It was heartening to see medical and social work students together to address these issues," says Gehlert, who plans to focus on how social problems affect all segments of society.

"It is a matter of reaching out to convey how social work is uniquely poised to address these problems," Gehlert says.

In addition to her leadership at Carolina, Gehlert will also guide social workers throughout the country. Earlier this year, she was elected president of the American Academy of Social Work and Social Welfare, a group of 115 senior scholars who provide guidance to the profession.

My work was happening during a period of rapid social change in the United States, with new attention to the plight of racial and ethnic minorities and persons living in poverty.

Sarah Gehlert, incoming dean of the College of Social Work

She received a bachelor's and a master's in anthropology and a MSW from the University of Missouri-Columbia and a doctorate from Washington University.

The University of South Carolina's College of Social Work offers bachelors and master's degrees and has the state's only doctoral program. The college is home to SeniorSmart, one of the 18 SmartState Centers for Economic Excellence at Carolina. Faculty researchers promote social justice, social well-being and works for solutions to problems of poverty, crime and preventable diseases through the college's Center for Child and Family Studies, Community Empowerment Center, the Institute for Families in Society, the I. DeQuincey Newman Institute for Peace and Social Justice and the South Carolina Center for Gerontology. Social work students donate annually their time conducting service projects across the state with an economic value of approximately $3.8 million.