Jory Mackenzie Fleming and Megan Patricia O’Brien received the Sullivan awards, the university’s top honor for undergraduates. This award is given each year for outstanding achievements, campus leadership, exemplary character and service to the community. The Sullivan award, given at 15 colleges and universities across the country, is named for the 19th-century New York lawyer and philanthropist. 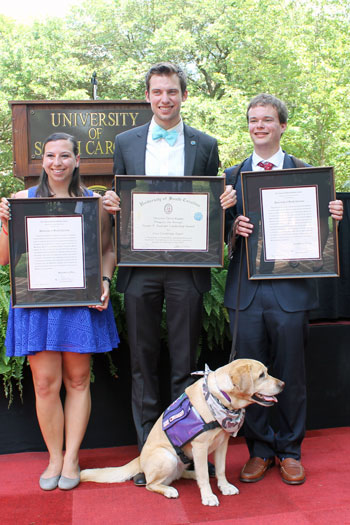 Cory Cambridge Alpert received the Swanger award, which is the university’s second-highest undergraduate honor. Named for a former president of Omicron Delta Kappa, which sponsors the university’s Awards Day, it is given to a graduating senior for exemplary leadership and service to the Carolina community.

This year’s top three honorees all represent the College of Arts and Sciences.

“These students not only have excelled academically during their time at Carolina but also truly demonstrated what it means to serve others,” said Lacy Ford, dean of the College of Arts and Sciences. “They are a testament to the values and direction of our college and the rich contributions we make to the values and direction of the university and our entire community.  We are tremendously proud of these outstanding students for their achievements and dedication to improving the world around them.”

Fleming, a Rhodes Scholar from Columbia, has maintained a 4.0 GPA as a double-major in geography and marine science. A Capstone Scholar and Fellow, he also is a Truman, Goldwater and Hollings Scholar.

Recipient of the Julian J. Petty Award from the geography department and the George A. Wauchope Phi Beta Kappa Award, Fleming works as an intern in the Office of Fellowships and Scholar Programs speaking to students about writing strategies and the fellowship process.

He is co-president of Gamma Theta Upsilon, an international geography honor society he helped restart at Carolina and serves as the education outreach coordinator for Students Engaged in Aquatic Science.

Fleming is also a University 101 senior peer leader and co-founder of Cocky’s Canine PAALS, an organization that sends student volunteers to Palmetto Animal Assisted Life Services to fundraise and increase awareness on campus about service dogs and disabilities.

He has completed more than 300 hours of work experience in geospatial technologies and multiple research projects in several fields. In addition, Fleming dedicated over 500 hours of service to USC and the community during his time at Carolina. He has been an active participant in the South Carolina Center for Children’s Books and Literacy, Cocky’s Reading Express and his church.

“The USC community has left an indelible mark on me, showing the exuberance that can be found in everyday life and inspiring me to be a change-agent,” Fleming says.

O’Brien has maintained a 3.72 GPA as a biology major while taking part in various leadership activities.

A McKissick Scholar from Flemington, New Jersey, O’Brien is a member of Omicron Delta Kappa, Order of Omega and received the Order of Omega National Scholarship. She is vice president of programming on the Sorority Council and a member of Kappa Kappa Gamma sorority. She is also a Capstone Scholar and Fellow.

She is part of Phi Delta Epsilon international medical fraternity, serves on Dance Marathon’s executive staff and is a student assistant and peer consultant in the Student Success Center.

O’Brien is a two-time Magellan Apprentice grant recipient and served as a Magellan Ambassador. In addition, she served as an orientation leader and has worked as an intern in the university’s Parenting and Family Research Center for three years.

Off-campus, O’Brien volunteered at the Palmetto Baptist Emergency Department for three years and logged more than 350 volunteer hours with many other community organizations. She was recently one of three students nationwide to be awarded the It’s On Us Courage Award by former Vice President Joe Biden as part of the It’s On Us Initiative for promoting sexual assault education and prevention on college campuses.

“I would say that my most noteworthy contribution to USC would be my efforts to promote sexual assault education and prevention. To be personally thanked by the Vice President for my efforts at USC was such an honor,” O’Brien says.

Alpert, who has maintained a 3.85 GPA as a sociology and Russian major, is from Irmo, South Carolina.

A member of Omicron Delta Kappa, Alpert has served as student government’s deputy elections commissioner and attorney general. He worked as a tutor for Gamecock Athletics and as a research assistant for the departments of sociology and criminology.

During his sophomore year, Alpert studied abroad at the University of Queensland in Australia, where he was awarded best delegate at the largest Model United Nations conference outside the United States.

He has devoted many hours to the Columbia community, serving as coordinator for UofSC Relief after the 2015 floods in addition to his roles as the Famously Hot New Year stage manager and production assistant and a Trustus Theatre company member.

During the recent presidential election, he worked on the advance team for Hillary for America and served as the national executive director for Lead the Way, a voter registration campaign he founded, which set national records for collegiate voter registration.

Alpert says the giving back that he and thousands of volunteers did as part of the university’s response to the flooding demonstrated what it means to be a Gamecock.

“It showed that our education and leadership doesn’t just stay in the classroom – it extends to every facet of our lives. I have given the last three years to this community. I have shown what it means to be a Gamecock: to be committed to academic excellence, to learn from those around us, and to make the world a better place because we are here,” Alpert says.

A full list of this year’s award winners is available online.