The Kennedy Greenhouse Studio at the University of South Carolina School of Journalism has won the award for New Construction in Historic Context from the Historic Columbia Foundation. This award highlights new buildings in a historic district adjacent to or within existing historic structures that complement the historic context. The greenhouse was designed by the Boudreaux Group, an architecture interior planning company based in Columbia.

“We are excited to recognize the University of South Carolina for this award,” says Robin Waites, executive director of Historic Columbia. “Replacing a greenhouse that previously stood here with a building that maintains the same form and features, but embraces dynamic and vital new use makes it even more important as an enhancement to the site.”

The greenhouse, adjacent to the new School of Journalism and Mass Communications, features a broadcast studio, control room, office and dressing room. The space is used by senior broadcast students to produce their Carolina News broadcasts. It is also used by Student Gamecock Television, a student organization. 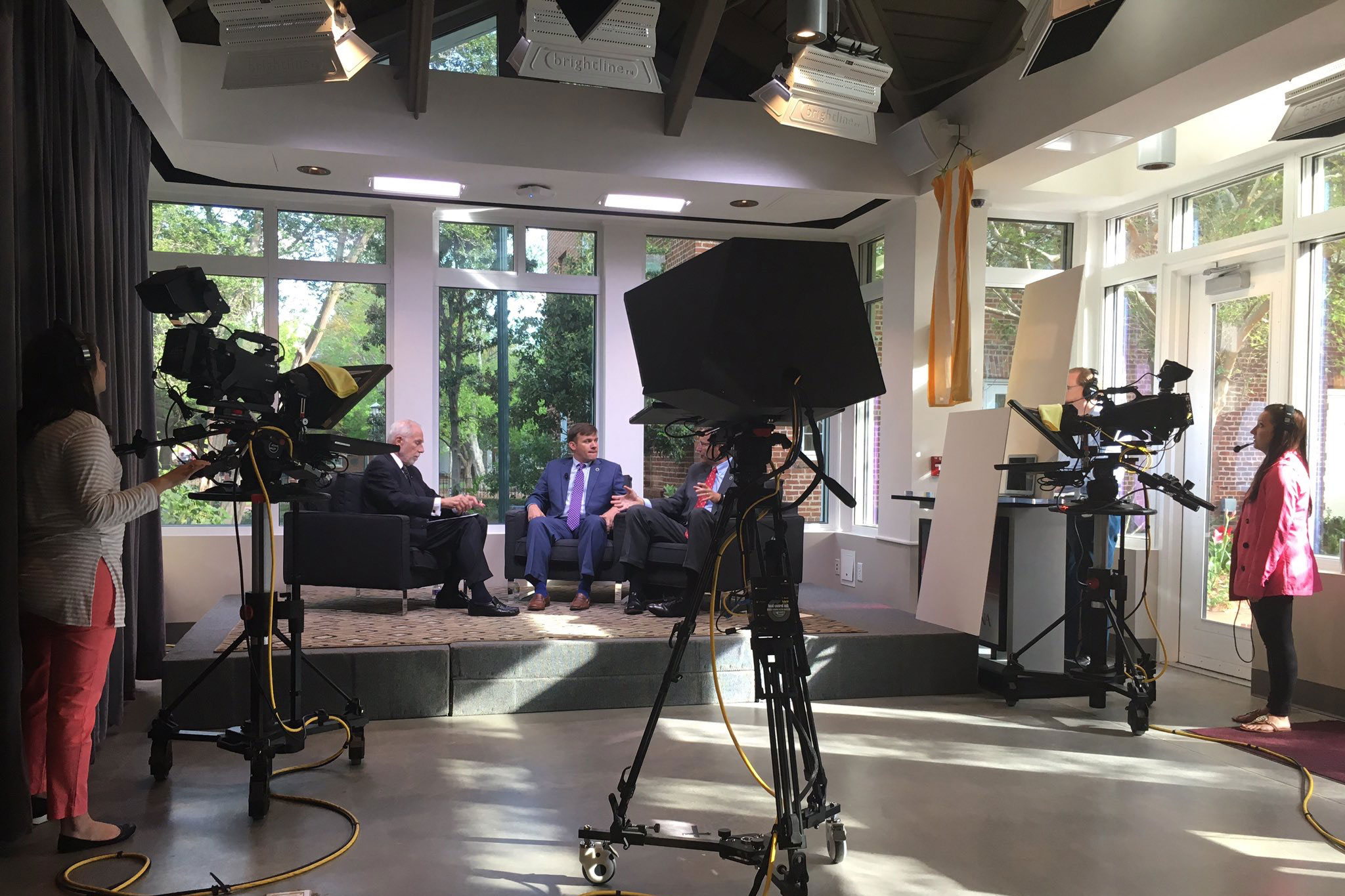 College of Information and Communications dean Charles Bierbauer hosts the ETV program "This Week in South Carolina" from the Kennedy Greehouse Studio.

"We envisioned a showcase for both our journalism program and the university, a crystal in the heart of the campus somewhat like the NBC 'Today' show's sidewalk studio," Bierbauer says.

Carol Pardun served as director of the School of Journalism at the start of the project. Very early in the planning stage for the new School of Journalism, Pardun and Bierbauer would walk the grounds of the building to discuss ideas. When they noticed the greenhouse, they started dreaming about a way to move the building and turn it into a “greenhouse of ideas,” where students could experiment with new technologies and campus visitors could see what students were doing.

President Pastides was very open to Pardun's and Bierbauer’s ideas. He told them that if they could find funding and keep the building looking like a greenhouse and with Board of Trustees' approval, the property was theirs. The rest, as they say, is history.

“I think for the university, this award shows the benefit of staying true to what is there, but not to the detriment of progress,” says Pardun. “What’s great about this award is that it celebrates history — and it celebrates innovation, that lines up quite well with journalism and mass communication.”

Construction of the greenhouse studio was made possible by Lou Kennedy, a 1984 alumna of the School of Journalism. Now president and CEO of Nephron Pharmaceuticals headquartered in Columbia, Lou and her husband, Bill, donated $1.5 million for the project. Kennedy envisions the studio as a place where students can learn from one another and become better journalists. She also hopes the spaces will be used not only by students, but by the community as a whole.