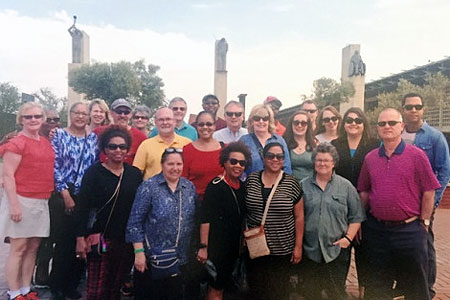 Earlier this year, 23 university faculty and staff embarked on a-once-in-a-lifetime trip to the continent of Africa. We took the 8,000 mile, 21-hour journey to Johannesburg and Cape Town, South Africa, as participants in the fifth annual International Perspectives on Higher Education program. By the end of the week, we were friends and family, united not by blood but heartfelt experiences shared during a whirlwind seven days together.

What we would learn about the country, its people and ourselves that week was that South Africa race relations were where the United States was 60 years ago. That country is still struggling to find its equal footing after decades of oppression, and we are not that far removed ourselves.

On the surface, Johannesburg and Cape Town put forth facades of shiny, modern cities on the move. Whether we were touring the different campuses or the cities, we saw how the realities of unequal educational opportunities brought to bear the differences between the haves and the have-nots.

A banner flying on the University of Johannesburg campus summed it up in a Tibetan proverb: “A child without an education is like a bird without wings.”

The trip to South Africa encouraged us to confront and discuss difficult issues surrounding race and equality. We drew parallels to our experiences in America, and delved into ways we could collaboratively meet the challenges of inequity in the United States.

While each of the four institutions we visited distinguished itself either through research or a specialized curriculum, the decolonization of higher education was a universal theme expressed by students and faculty at all of the institutions. They’re all striving to design a more Afrocentric education system, rejecting a system based solely on western thought.

Yet, evidences of western lifestyles and commerce are everywhere: Kentucky Fried Chicken franchises and familiar brands of vehicles such as Toyota, Mercedes, Chrysler and Ford dot the city and highway landscapes. English is widely spoken, even though it is not South Africans’ first language. The country has 11 official languages and the majority of South Africans are bi- or multilingual.

While visiting the university campuses and talking with the students were enlightening experiences, the most impactful observations and impressions happened outside the campus gates. Vestiges of Apartheid are most visible. Walls are ubiquitous in South Africa; walls with locks and sturdy gates surround Hollywood-style houses, modest homes, apartment buildings, nearly all freestanding businesses and even small strip malls and shopping centers.

They were erected throughout the cities as the government prepared to outlaw Apartheid in 1991, and fear of violence gripped the country.

Today, 26 years post-Apartheid, the races live together, go to school together, socialize together. As, one of our hosts said, economics is the great equalizer. If you have the financial means, you can have it all. However, high unemployment plagues the country, and the farther you go from the city center, the more overwhelming the signs of poverty. Soweto, a township on the edge of Johannesburg and created during the height of Apartheid, is a visible punctuation mark on that poverty. We saw poorly constructed houses built with whatever materials were available. We saw beggars and residents selling their wares to tourists who rush in, gawk and leave.

It was during these tours that many in the group began to examine their belief systems, biases and prejudices. During our reflections every evening, honest, raw conversations brought these feelings to the fore. Tears were shed, voices were raised and hugs were shared.

Before boarding our flight back home, we were reminded of the powerful lessons learned and the incredible bonds that were formed, the work that remains. And we were reminded that each of us has the responsibility to do the hard work of making the university and the world better places than we found them.