Something old, something new

Looking back at the School of Law's first building

When the School of Law moves out of the well-worn Law Center on South Main for a spacious new home on Gervais Street, there will be high-fives all around. 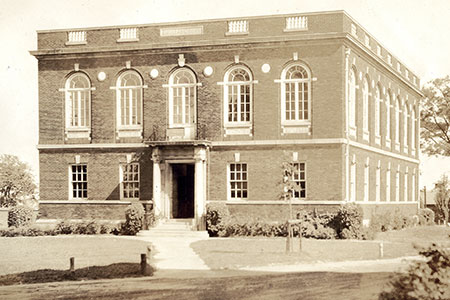 The School of Law's first freestanding building was originally called Petigru before being renamed Currell College.

But this isn’t the first time in the law school’s 150-year history that it has traded old for new. Exactly 100 years ago, the Legislature approved funding for what would become the law school’s first freestanding building.

It was named Petigru, and Sarah Leverette remembers the building well. She was born the same year it was completed, in 1919, and was the only woman to graduate with a law degree in the Class of 1942. “The building itself was small with no court­rooms,” she says, “and the library was just one room.”

Not long after graduation, Leverette became the law school’s librarian and taught legal bibliography. One of her students was Ernest F. Hollings, who had been her classmate in law school, then served in World War II before returning to complete his law degree.

“Everybody was coming back from the war, and they all thought they wanted to be lawyers,” Hollings recalled decades later. “We started with about 122, and 22 graduated.”

In 1950, just three years after Hollings graduated, the law school moved into its second home — also called Petigru College — having outgrown the first Petigru (which was then renamed Currell College). More growing pains led to the school’s third home, the Law Center on South Main Street where future attorneys have been learning their profession for the past 44 years.

The School of Law’s new home — its fourth, if you’re keeping count — occupies the block bounded by Gervais, Bull, Senate and Pickens streets. With 187,500 square feet, it should provide ample room to grow for decades to come. And while it has its share of modern bells and whistles, the new facility pays homage to the past in several ways.

Granite from the walls of the former Central Correctional Institute, a Columbia prison built in the Civil War era, has been fashioned into benches in the building’s courtyard. Decorative woodwork salvaged from a former Richland County courthouse and a 19th century bench from the S.C. Supreme Court have been incorporated into the interior design.

Leverette, Hollings and a dwindling number of other law graduates remember the first Petigru. Thousands more who matriculated at the second Petigru and the Law Center have fond memories of their respective law school homes. And a new generation of law students will soon be forging their own experiences when the grand new law school facility opens its doors.