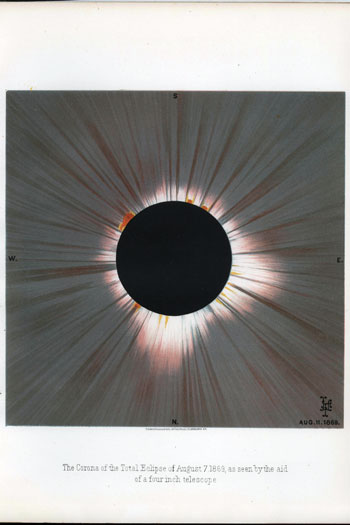 This ancient view of the sun's corona during an eclipse comes from one of several books in the Robert B. Ariail Collection of Historical Astronomy, Irvin Department of Rare Books and Special Collections, University of South Carolina Libraries that will be on display in advance of the Aug. 21 eclipse.

While University of South Carolina students, faculty and staff are always encouraged to reach for the stars, this August their focus will literally turn skyward to the once-in-a lifetime total solar eclipse.

Solar eclipses have long captured people’s imaginations throughout the ages, and the university will host special events dedicated to exploring the historical fascination surrounding such astronomical events starting Aug. 17 through the Aug. 21.

“It’s rare for an eclipse to happen in the same spot, and it is rare to see such a phenomena,” says Michael Weisenburg, a reference and instruction librarian who oversees the Robert B. Ariail Collection of Historical Astronomy in the university’s Irvin Department of Rare Books and Special Collections.

“Eclipses were once terrifying events,” he says. “People came up with stories as to why they believed this happened throughout the centuries. They were thought of as demons, monsters and gods fighting in the heavens.”

Weisenburg says during the classical period, people were able to loosely predict eclipses but could not decipher why total solar eclipses occurred.

“Mythology considered them to be omens using the word ‘shia’ which means to eat,” he says. “The Chinese believed that a supernatural figure was swallowing the sun. Others like the Vietnamese had stories of a frog eating the sun. There was no way to fully predict and explain with reasoning as to how and why total solar eclipse happened during those days.”

The lecture entitled, “Solar Eclipse: The Dread and the Fascination” will take place at 7 p.m. in the W.W. Hootie Johnson Performance Hall at the Darla Moore School of Business. Basu will discuss the nearly 5,000-year history of solar eclipses and what humankind has learned from them.

Starting Aug. 17, The Robert B. Ariail Collection of Historical Astronomy will be on display in the Irvin Department of Rare Books and Special Collections at the Hollings library to showcase archived eclipse books dating back to as early as the 16th century.

Donated by amateur astronomer Robert Ariail, the 5,200 item collection is one of the most historically comprehensive and includes an entire history of astronomy represented in one collection.

Carolina graduate Ariail spent nearly his entire life collecting the books, and the items on display will showcase a selection of the most rare and relevant books to complement the viewing of the upcoming eclipse.

Featured will be books such as “Novae Theoricae Planetarum,” the oldest in the collection written in 1537 by Austrian mathematician and astronomer Georg von Peuerbach and “De la Sfera del Mondo,” the earliest printed star atlas written by the Italian philosopher Alessandro Piccolomini.

Other books on display will include 19th century amateur astronomy books used to make astronomical observations.

The university’s McKissick Museum will also present an outdoor educational event Aug. 21 featuring naturalist-in-residence Rudy Mancke, who will discuss the nature of solar eclipses. The event will take place in front of McKissick Museum on the university’s historic Horseshoe at 2 p.m. in anticipation of the darkest part of the event at 2:41 p.m.

All events are free to the Carolina community and the public.