The healing power of art 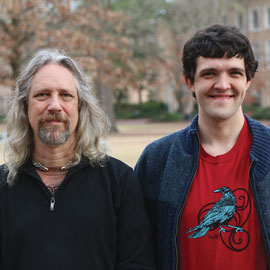 The Hansen family's artistic legacy spans three generations at the University of South Carolina. Meet Danny and Kendall Hansen, who are finding success with their fast-growing handcrafted jewelry business.

Not even a decade-long battle with dementia could keep retired art professor Harry Hansen from creating new works until his death in 2013.

Hansen taught at the University of South Carolina for 33 years, and his artistic passion didn’t wane during his later struggle with dementia — though it did change.

“He was drawing and painting on his last day,” says his son, Danny, a 1990 Honors College graduate. “He went through a period where he was still aware, and when he was aware that he couldn’t do what he used to be able to do, he stopped. And then as the illness progressed, he forgot that he used to do it a different way and started doing it again.”

Danny says his mother, Dee Hansen, also a painter, catalogued all of her husband’s work.

“It was vibrant. All the skill was there, all the technique was there, all of the understanding of contrast and light and dark and silhouettes — it was all still there, but the style changed unbelievably,” Danny says. “It was fascinating.”

Dee Hansen and her daughter, Susan Hansen, founded the Immutable Passion Project, which facilitates dialogue about the role that art and creativity play in combating degenerative brain disease. They speak to organizations about Harry’s experience, and traveled in 2012 to the seventh International Conference on Creative Expression, Communication & Dementia at the University of Worcester in the United Kingdom.