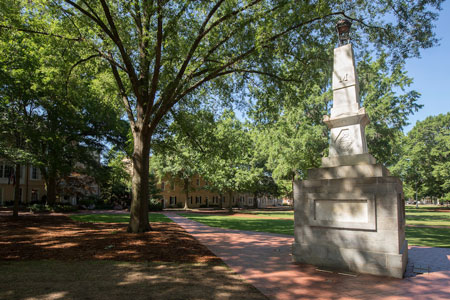 USC is now ranked 46th — up from the 49th slot last year — among all public institutions, and 25th among state flagships in the latest U.S. News and World Report undergraduate rankings.

Boosted by a growing reputation for academic excellence and research prowess, the University of South Carolina climbed several spots in the latest U.S. News and World Report’s undergraduate rankings publication released this week, now ranking 46th among all public institutions, and 25th among state flagships.

The newest rankings in the popular annual publication bring the Columbia campus up from the 49th slot a year ago; this is the fourth straight year in which the overall ranking has improved. Contributing to the gain this year were an improved peer ranking score, an escalating graduation rate, reduced undergraduate class sizes and an increase in full-time faculty members.

In addition to the overall ranking, the international business program at the Darla Moore School of Business retained its No. 1 national ranking, a position it has held for nearly 20 years in a row.

“We know that rankings don’t tell the whole story of an institution, but it is gratifying to see USC moving in the right direction in some important quality measures,” says USC Provost Joan Gabel. “I’m proud of the work our faculty and staff do every day to do high impact research and create a world-class educational experience for our undergraduate students, both inside and outside the classroom.”

USC’s other campuses also exceled in the latest rankings:

USC has a total of 47 nationally programs ranked in U.S. News and World Report’s undergraduate and graduate rankings, which are released annually in the spring.