Capstone celebrates 50 years of being home for students 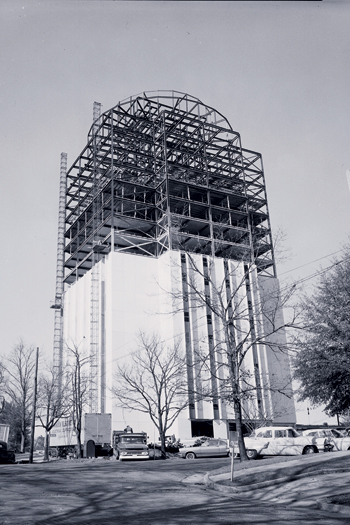 Capstone was the first women’s dormitory on campus without a curfew, representing “a new experiment in coed responsibility,” according to The Gamecock.

When Capstone House opened in fall 1967, the new “women’s honor dormitory” was a little behind schedule: carpets and drapes wouldn’t arrive for another week, the cafeteria wouldn’t open for another month, and the grand opening of the revolving restaurant at the top had been bumped to November.

For rising seniors Sandy Hennies and Gwen Garrett, though, none of that mattered. The two English majors, roommates the year before at what is now Patterson Hall, got the very last room at Capstone, just one floor up.

They didn’t even mind living next door to the house director, who sometimes overheard their private conversations. “It wasn’t the most desirable room,” says Hennies, now a marriage and family therapist in Columbia. “But Capstone was the latest, greatest thing around when we moved in.”

Indeed, the new high rise was to be the definition of modernity, featuring air conditioning, suite-style living for more than 600, and, of course, that now-iconic revolving restaurant, which would provide panoramic views of a growing campus and city — once university President Thomas F. Jones flipped the switch on Nov. 10.

“I had never in my life heard of a restaurant that rotated at the top of a building,” says Hennies. “That was like something out of Star Wars — except that was even before Star Wars.”

In a telling sign of the times, Capstone was also the first women’s dormitory on campus without a curfew, representing “a new experiment in coed responsibility,” according to The Gamecock. 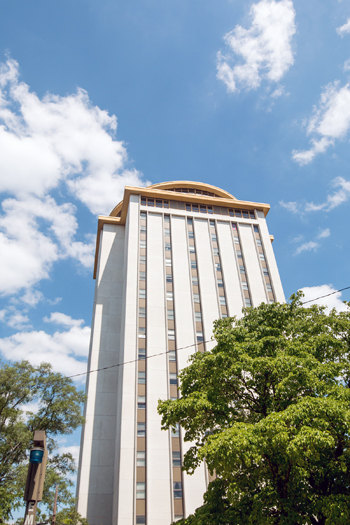 “It wasn’t the most desirable room ... but Capstone was the latest, greatest thing around when we moved in.” — Sandy Hennies

“That was very appealing. Of course, it wasn’t quite as appealing to us because if we had our window open, we could hear everybody outside,” says Hennies. “Men still couldn’t come up, so girls would be outside with their boyfriends at all hours — ‘Oh, I love you!’ ‘Oh, I’m gonna miss you!’ I mean, it was ridiculous. My roommate used to lean out sometimes and yell, ‘Shut the hell up!’ and then slam the window!”

USC’s golden crown wasn’t the only shiny new thing on campus that fall. The Physical Sciences Center had opened in July, and a couple weeks after Capstone opened in September, a 37-ton section of roof was hoisted into place atop the Carolina Coliseum and contractors broke ground on the humanities complex.

One thing well established by 1967 was the nearby nightlife of Five Points, a fact Garrett remembers fondly — for one very good reason.

“I was upstairs in one of my good friends’ room, studying for an exam, and she gets a phone call,” she says. “I was the only person there so I answered. It was this guy named Bill Kuhns, a friend of my friend, and we started talking. Finally, he says, ‘Well, hey, let’s go have a drink.’ ”

The relaxed curfews that had kept her and Hennies up at night were now another matter.

“Because I lived at Capstone, I could go,” says Garrett. “So 12:00 at night, we go down to Five Points, have a drink, fall in love and that was it. Forty-nine years later, we’re still married.”