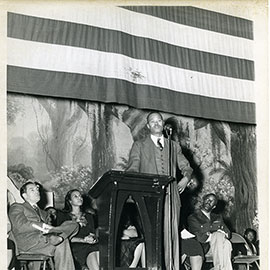 John Henry McCray, editor and publisher of “The Lighthouse and Informer,” mobilized the black community around civil rights issues in South Carolina beginning in the late 1930s. His efforts are featured in Sid Bedingfield's book.

Alumnus and visiting scholar Sid Bedingfield will discuss his “Newspaper Wars” book and the role of the press in South Carolina’s civil rights history.

Where: School of Journalism and Mass Communications, Room 106

Journalists played a pivotal role in the struggle for civil rights in the Palmetto State in the mid-20th century.

Their efforts went beyond reporting about news events to political activism on both sides of the fight, says Sid Bedingfield, author of the recently released “Newspaper Wars: Civil Rights and White Resistance in South Carolina, 1935-1965.”

Bedingfield will discuss the influence journalists had on the civil rights movement during a Nov. 8 public lecture sponsored by the College of Arts and Science’s History Center.

“In the 1950s, mainstream white newspaper journalists outwardly embraced impartiality and professional ethics, but I show how journalists struggled with that,” he says. “While they presented themselves as objective observers, behind the scenes they were political players.”

Some examples of the white press’s resistance to civil rights include journalists helping to organize the massive resistance campaign after the Brown v. Board of Education decision. After that failed, they worked closely with Republican Party leaders to rally support for the GOP’s conservative wing in the South.

The African-American press also engaged in active political strategies, but their efforts were more open. John McCray, editor and publisher of “The Lighthouse and Informer,” mobilized the black community beginning in the late 1930s. He and the paper took on issues such as equal pay for black teachers, the right to vote in Democratic primaries and school segregation.

Bedingfield, a former newspaper and television journalist, began the research that would lead to “Newspaper Wars” during his graduate school days at the University of South Carolina. He received a doctorate in mass communications in 2014. Bedingfield currently serves as an assistant professor in the Hubbard School of Journalism and Mass Communication at the University of Minnesota, where his research focuses on mass media and its impact on political and cultural change across time.