University Libraries Dean Tom McNally remembers asking the question while walking through the stacks at South Caroliniana Library: “Where are the sprinklers?” The response: “There aren’t any.”

The 176-year-old building on the historic Horseshoe that’s home to one of the country’s greatest collections of Southern history and manuscripts didn’t have any way to protect its priceless holdings from fire. McNally knew that had to change. The first person he went to see was President Harris Pastides. 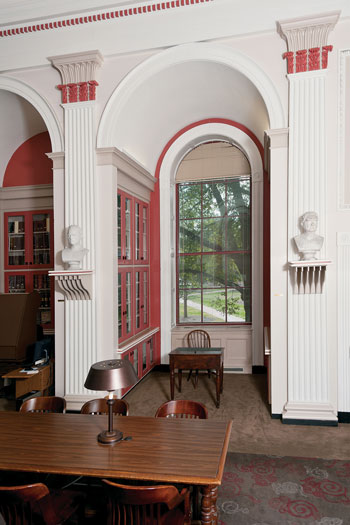 The reading room at the South Caroliniana Library is a replica of the room that housed Thomas Jefferson's personal library in the second Library of Congress.

“He said, ‘Tom, you’ve got to move everything out of that building. You’ve got to protect the collection. If anything happens to those materials, we’ll both have to resign,’ ” McNally says. “I think he was only half serious.”

South Caroliniana, which was the university’s main library for 100 years, was designed by famed architect Robert Mills. Listed on the National Register of Historic Places, its second floor reading room is a replica of the room that housed Thomas Jefferson’s personal library in the second Library of Congress. Among its treasures are the Civil War diary of Mary Boykin Chesnut and photographs, newspapers, books and manuscripts that tell the history of the state and nation.

Pastides understood the importance of protecting the university’s most iconic building and its holdings. He requested and received $5 million from the state legislature for the library’s renovation. But with a 176-year-old building, university leaders knew that probably wouldn’t be nearly enough.

Thanks to a $5 million gift to the university from an anonymous donor, the country’s oldest freestanding academic library is getting a needed renovation. Work is well underway at the South Caroliniana, with all of the materials moved to the Thomas Cooper Library and other sites around campus. It will take 18 months to complete the planning and testing work on the building and another 18 months for construction to maintain the historical integrity of the library.

“We’ll have sprinklers that you will never see. The whole building will be rewired. All of this will happen where you won’t see any of it,” McNally says.

South Caroliniana will be reopened and rededicated in summer or early fall of 2020.

“What this anonymous gift will mean to us is we can handle anything that comes up during the renovation,” McNally says. “We hope nothing comes up so a good bit is left over, and we will create an endowment to support the building.

“These old buildings need constant TLC. How many buildings on the USC campus have a significant endowment? None. This will be the first of its kind. In not too many years when I retire, I will know the Caroliniana will always be cared for.”

Included in the gift from the donor were funds to purchase a chandelier by American artist Dale Chihuly. The Burnished Bronze and Garnet Chandelier hangs in the Perrin Family Lobby at the Senate Street entrance of the University of South Carolina School of Law.

“The elegance of the Chihuly chandelier adds to the sense that the study of law requires a seriousness of purpose, and it defines our new building very much as an important building for the broader community,” says Rob Wilcox, dean of the law school. “At the same time, this magnificent example of public art reminds our law students daily of our humanity and of our responsibilities to one another.”

The $5 million gift that made all of this possible — the library renovation and purchase of the Chihuly chandelier — comes from a donor who does not want to be named. Chris Myers, USC’s senior director of development, says there are many reasons individuals don’t want to be identified when they give large gifts, including privacy and an interest in keeping the focus on the organization and not the donor.

“Sometimes they are humble or shy and they don’t want publicity,” Myers says. “Or they get pleasure from giving and don’t want to be thanked publicly for the donation. Other reasons people might want to give anonymously are they think it’s better for the cause, they believe the results that the organization are seeking are better achieved if the attention goes to the organization and not the donor.

“And some people don’t want fundraisers to harass them and ask for more money.”