Finding the right help for children with reading disabilities

“Brown bear, brown bear, what do you see? I see a red bird looking at me.” Turning the brightly colored pages of a classic children’s picture book, a young boy reads aloud the simple narration. But he isn’t actually reading the words; he’s just reciting the sing-song sentences from memory. When asked to read a particular word on the page, the ruse becomes evident. He can’t decode the letters d-u-c-k that form the word. On an intellectual level, the young man is just fine, above average even. But when it comes to understanding written language, the circuitry in his brain is wired differently. And in a society where reading is almost as essential as breathing, that is a very big deal. 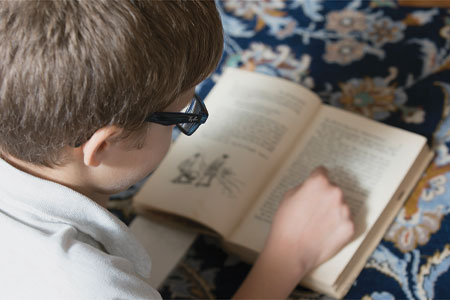 An assessment of how every school district in S.C. is testing for dyslexia and providing resources is underway by psychology professor Scott Decker.

It’s estimated that 6 percent to 10 percent of K-12 students — some say as many as 20 percent — struggle with reading disorders of some kind. Dyslexia, a learning difficulty with reading or interpreting words, letters and symbols, became a federal definition of disability in 1970, though the term was rarely used back then. In the past decade a grassroots dyslexia movement has gained momentum across the country, led by parents who are frustrated with what they perceive to be the ineffectiveness or unresponsiveness of school systems.

“There’s been this philosophy that if you just put books in front of kids, they will naturally read,” says Scott Decker, an associate professor of psychology at the University of South Carolina's College of Arts and Sciences and director of the school psychology program. “That happens for some kids. It clearly will not happen for a kid with dyslexia.”

For much of his academic career, Decker has conducted research aimed at learning more about the neurological underpinnings of dyslexia. He has also devoted considerable time to fine tuning tests that can determine whether a child has a reading disorder or is simply on a delayed trajectory. His work has become familiar to parent networks; many across South Carolina and beyond (including parents interviewed for this article) have brought their children to Decker’s university lab for assessment and to participate in his dyslexia research.

Earlier this year, Decker received a large grant from the S.C. Department of Education’s Office of Special Education Services to evaluate over the next three years how well each of the state’s 103 school districts is identifying and helping students with dyslexia.

“Because there hasn’t been a lot of guidance, everyone has been crafting their own policies — it’s like the Wild West,” says Decker. “We’ve heard that some school districts are doing a great job, but others are probably not performing at high levels.”

The stakes are huge for children with dyslexia. They tend to drop out of school in higher numbers than students who don’t have the reading disorder. They can also thrive — in K-12, college and beyond — if they can get special instruction geared for their challenges with reading.

Every solution comes with a cost, Decker says: “Parents of children with dyslexia have enormous stakes to think through — private school tuition at schools that specialize in reading disabilities; the sacrifice of time and income to do homeschooling; or working with a public school system that might or might not be responsive to their needs.”

“When I repeated first grade and then got pulled out of regular class because I couldn’t read, I felt dumb, I felt stupid,” says Jen Hammon, a physical therapist and mother of four. “I was put in a special ed class for several years, and I got really good at putting together puzzles of the United States.”

Hammon, the daughter of Cuban immigrants, later thought that her struggle with reading was because she had learned to speak Spanish before English. But it became apparent that she had dyslexia. Through grit and determination, she began to turn the corner in ninth grade. “I somehow decided I wanted more for myself,” she says. “I found my way of doing things, finished in the top 10 percent of my high school class and didn’t realize at the time that I was probably working three times as hard as anyone else to get through.”

When two of the Hammon's four children were identified as dyslexic, memories of her own struggles came flooding back. She found herself putting her son Seth through the same repetitive reading exercises she had endured — with the same dismal results.

Seth and his younger sister, Ella, now attend Sandhills School in Columbia, established in 1970 to serve students with dyslexia.

“I’ve dedicated my life to dyslexia,” says Sandhills headmaster Anne Vickers, who was a public school resource teacher in Charleston for 11 years. “Two of my younger brothers are severely dyslexic — one of them, when he couldn’t read in the first grade in 1962, was put in the corner and called mentally retarded.

“Even in this day and age, children with dyslexia are still called ‘slow’ — ‘He’s a slow learner,’ or ‘She’s mentally challenged.’ And it’s just the opposite. Our children (with dyslexia) are very bright and very capable and college bound.”

Paige Rekers didn’t know where to turn when the small private school attended by her son, Gabe, told her they weren’t equipped to help with his reading disability. She learned about Tutor Eau Claire, an afterschool program established by Carolina biology professor Bert Ely and his wife, Tracey, that offers resources for reading success. Rekers took a two-week training program there in alternative reading instruction designed for children with dyslexia and began homeschooling Gabe. So far, so good, she says.

“We wanted to take ownership of our child’s education and thought homeschooling would be the best fit for him,” she says. “While homeschooling, in general, isn’t easy, homeschooling a child with learning differences presents its own challenges. It takes time for their working memory to improve through multisensory learning and repetition.”

Not long after they were married, Tim and Kim McDonough had a conversation about children, dyslexia and education that turned out to be prescient. Tim McDonough had struggled in school because of his dyslexia and never got the help he needed. He was fearful of having children, not wanting them to endure what he had.

“I told him, ‘I promise you, I will make sure our kids don’t experience what you did,’ ” Kim McDonough says. “I never realized how hard that promise would be to keep.”

The McDonoughs, who live near Winston-Salem, N.C., have three children, including 10-year-old twins Gracyn and Gabe. Both have dyslexia, but it took dogged persistence to get their school to even acknowledge their deficiencies and have them tested. “Everybody knew it and saw it. Clearly, the system is not set up to deal with deficiency,” says McDonough, noting that it’s the same school where her husband struggled 35 years ago.

That frustration has turned the McDonoughs into fierce advocates for their children and for other parents struggling
with the same issues. It also points to decisions made at the national level that affect local school policies.

When the number of children with learning disorders reached an alarming level 20 years ago, policymakers feared that public school systems would be bankrupted by the financial demands of providing specialized education to so many. In response, federal guidelines changed in 2004, leading public schools to move away from learning disorder assessments in favor of performance-based evaluation.

In that scenario, children who have trouble learning to read are given additional interventions, which, depending on the school system, might last for weeks or months. But parents complain that this approach can put children in a hopeless holding pattern.

“I think it’s a valid concern that kids, not just with dyslexia, per se, but with any learning disability, can be receiving additional intervention — but it’s not always a good intervention, an intervention targeted for their needs,” says Kathleen Marshall, a veteran special education professor in Carolina's College of Education. “And I’ve heard of kids sitting there for a year, not receiving the appropriate help. If that were my kid, I’d be furious.

“So I think anything that Scott (Decker) is doing relative to seeing what is happening to those kids who have reading disabilities is very important and can really help us address those needs.”

One fundamental issue is that schools in South Carolina and many other states have focused on whole-word reading and reading for enjoyment, rather than the fundamental phonic decoding. “For a child with dyslexia, decoding the words is the challenge,” Marshall says. “That is the disconnect in the last 30 years at least.”

As part of a statewide team, Marshall has helped write a dyslexia instruction module for S.C. elementary school teachers. General education teachers in South Carolina are also required to take a three-credit-hour course in how to teach children with reading disabilities.

“But if dyslexia is going to be separated from the special education realm, can you expect a general education teacher not only to teach what the majority of the kids need but also to provide the more individualized support that these kids with reading disabilities need in the context of the general ed classroom?” she says. “It’s impossible for them to do that.”

Real solutions to the dyslexia dilemma will require public educators across the state to address basic questions, then commit to implementing systemic solutions, says Decker.

“What are reasonable models to use? How should we be identifying these kids and at what age? And once we identify them, what kinds of remedial services should they be getting?” he says. “Those are kind of tough questions to address, and we can’t promise the moon because schools just don’t have the resources to provide the same level of services as specialized private schools.”

Decker is moving forward with his assessment of how S.C. school districts are dealing with dyslexia with a goal of making ‘best practices’ recommendations to the state Department of Education. This fall, he organized a conference with S.C. school psychologists to discuss their policies regarding dyslexia, and he’s also working to organize a consortium of scholars across the university to bring their collective expertise to bear on dyslexia and other learning disabilities. Eventually, he envisions creating a large afterschool program with Carolina undergraduates trained in reading intervention, enlarging the efforts of grassroots programs such as Tutor Eau Claire.

Ultimately, it’s going to take research and a network of partnerships to make progress, he says. “No one has stopped to say, ‘OK, let’s do a little research first to find out what’s working,’ ” Decker says. “Let’s look at how we can implement different models in the confines and financial restrictions of a typical elementary school in South Carolina, and then let’s start putting this stuff into action.”

When education research is carried out with purpose, it goes beyond mere theory and statistics. It’s hands-on work that translates data into best practices for teachers, counselors, school superintendents and other education leaders.

This series will highlight several faculty members who are making an impact on a breadth of research topics, from improving educational equity to increasing physical activity in elementary schools.