At its core, Rhonda Jeffries’ research looks at ways to improve education for marginalized people. That means infusing social justice into the curriculum as she looks out for students who are in danger of being left behind. 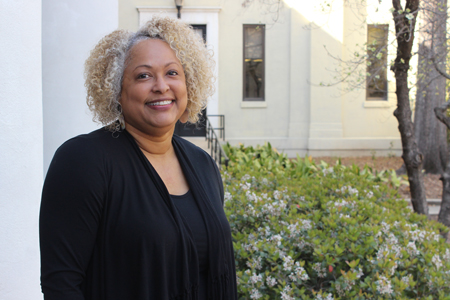 Rhonda Jeffries' research looks at how to close the achievement gap for racial minority and low-income students, specifically those tracked for remedial classes.

After receiving a grant about 10 years ago to look at math instruction at the second- and third-grade level, she became interested in STEM classes and in understanding how students are tracked. Working with one of her graduate students, she began researching how to close the achievement gap for racial minority and low-income students, specifically those tracked for remedial classes.

She wanted to make sure incoming high school students who were behind in math were able to catch up to their classmates and increase their opportunity to be college ready. The algebra project was born.

Knowing that students who do not take algebra I by ninth grade fall too far behind to make attending a four-year college likely, Jeffries’ idea was to teach algebra 1 to all students entering high school, even if they had not taken pre-algebra in middle school. As part of the project, a Richland County high school teacher taught the lowest performing students algebra I, and 90 percent of them passed the end-of-course exam.

“It became clear to us that just because students hadn’t been formally prepared, it wasn’t too late for them to catch up,” she says.

The next step was working with the school administration and teachers to expand the program for the entire ninth grade. That involved pre-teaching some students in an algebra seminar prior to regular class time, preparing them for what they would learn that day before they stepped into the classroom.

“When you try to tutor students after the class lesson was unsuccessful, it’s hard to get past the part where they’re humiliated and made to feel incapable,” Jeffries says. “Pre-teaching in seminars cancels that out. Our previously struggling students entered class ready to engage, and often they were outperforming students who were on-track for algebra.”

The first year, the test scores were impressive, even with the algebra seminar students included in the data set. By the second year, the high school outperformed every other school in the district. Some of the students were so inspired they asked for placement in honors-level geometry.

“How do students go from the lowest level to the honors level? It tells us that there’s no reason to throw kids away because of past performance,” she says. “Our kids enter elementary school at various levels; therefore, limiting early homogeneous grouping of students and providing options to adjust academic trajectories places all students in an atmosphere of hopefulness and expectation.”

When education research is carried out with purpose, it goes beyond mere theory and statistics. It’s hands-on work that translates data into best practices for teachers, counselors, school superintendents and other education leaders.

This series will highlight several faculty members who are making an impact on a breadth of research topics, from improving educational equity to increasing physical activity in elementary schools.