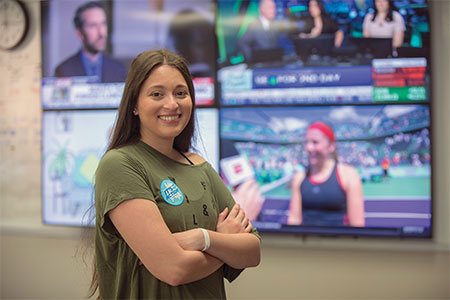 I’m Cuban-Honduran-American. My mom’s side is Cuban, and my dad’s side is Honduran. I was born in Miami, then we moved to Beaufort, South Carolina, when I was 4, and I lived there until I came here to college. I’m first-generation American, but I’m also a first-generation college student.

I’ve always been interested in journalism — eventually, I’d like to be a producer in a newsroom so my passion for social justice can affect marginalized communities — but when I came here I actually wanted to go into entertainment news. I started at SGTV (Student Gamecock Television) and did a segment called "Truth or Nah?" We talked about whether a celebrity rumor was true, which is so far from what I want to do now.

My transformation started in an Opportunity Scholars Program section of University 101. This was in 2014, right after the Michael Brown shooting, and our professor talked a lot about current events. That really got me thinking about the world we live in. I started to get more interested in the Black Lives Matter movement. The semester after that, I took a sociology class that really opened my eyes to issues of social justice.

I also started looking for more opportunities outside the classroom. The Office of Multicultural Student Affairs was doing a lot of programming related to Black Lives Matter and race in general, and I went to a lot of those events. I was also taking the sociology class, which helped me realize how important all of these issues really are. My roommate was a social work major, and I remember coming to my dorm after my sociology class and just ranting about all of the world’s issues — health care, welfare, all of these things. At that point, I kind of switched gears.

So I took more sociology courses, and sociology became my minor. I couldn’t take as many as I wanted because I still wanted to major in journalism, so I got more involved with social justice outside the classroom. At the end of my freshman year I applied to be an OMSA peer educator, which meant I got to go to different U101 classes and talk about diversity, inclusion and social justice. I also started going to Latin American Student Organization meetings. While I didn’t go as often as I could have freshman year, the president of LASO knew that I liked community service and nominated me for a new position, community service chair. Now, I’m the organization’s president.

In that role, I’ve learned that Carolina is more diverse than a lot of colleges and universities, but it could be more inclusive — even within the marginalized communities, which I know is a strong criticism. That’s why as LASO president I’ve tried to recognize intersectionality. We’ve partnered with IRIS, which is the LGBTQ+ organization, to talk about what it means to be a person of color on campus but also to identify as queer, and we’ve partnered with the Black Graduate Student Association to talk about racism and the Afro-Latino experience.

While I wish that the university would do a little more to encourage students to learn about other communities, I love this school and would encourage anyone to come here and take advantage of the same opportunities I’ve had, a lot of which I had thanks specifically to President Pastides. Students at other universities probably don’t have a president who is as open and willing to hear student opinions.

If you asked me freshman year if one day I’d be having monthly meetings with the president, I don’t think I would have thought that was possible. But now, doing Graduation with Leadership Distinction, I look back and say, “Wow, I’ve done all of these things,” and I’ve really changed. When I got here, I really only cared about issues that affected me personally. Immigration was important to me because a lot of people in my family are undocumented, but it wasn’t until college that I truly started to think about all of these other issues — police brutality, Black Lives Matter, queer issues — that should matter to me as well.

Janelys Villalta is applying for positions in media and to AmeriCorps VISTA.