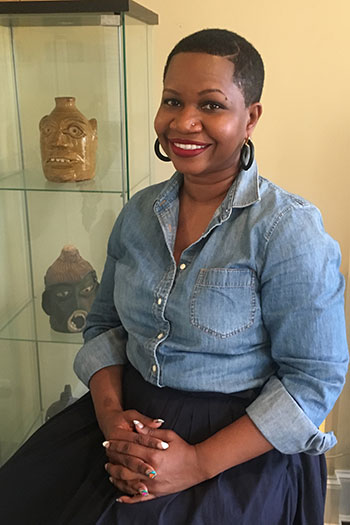 Deirdre Cooper Owens will discuss her research on early gynecological practices at 6 p.m. Monday in the Capstone Campus Room.

The Finding Common Ground series, presented by the University of South Carolina's Office of Diversity and Inclusion, continues this fall with guest lecturer, Deirdre Cooper Owens, assistant professor of history at Queens College, CUNY, and author of "Medical Bondage: Race, Gender, and the Origins of American Gynecology." Cooper Owens’s book addresses the history of medicine and enslaved women, including the work of controversial 19th century gynecologist J. Marion Sims, for whom Sims College was named in 1939. Owens will lead the fifth forum in this series beginning at 6 p.m. on Nov. 19 in the Capstone Campus Room, with a reception starting at 5:30 p.m.

Chief Diversity Officer John Dozier says, “This forum series was created for the purpose of promoting discussions that challenge us as a university community to be more thoughtful about how we create a more inclusive environment – one that moves us closer to our university values as stated in our Carolinian Creed.”

Students facilitated the first forum, held in August 2016, on "Policing in the 21st Century," which was a discussion that centered on addressing recent challenges between police officers and the communities that they serve. The forum featured criminology professor Geoffry Alpert, political science professor Todd Shaw and law professor Seth Stoughton with special guests Henrie Monteith-Treadwell, groundbreaking university alumna, and City of Columbia Police Chief Skip Holbrook.

Professors Tanya Wideman-Davis and Thaddeus Davis with special guest artist Michaela Pilar Brown performed an interpretive dance to a popular poem written by Carolina professor Nikky Finney for the second forum of the series in November 2016. "Arts and a Movement: How the voices and talents of a community can promote social change" was part of a celebration of the fifth anniversary of Finney winning the National Book Award for her collection of poems, “Head Off and Split.”  The forum was held to create awareness about the ways that university community members can use their unique voices and talents to promote social change.

In November 2017, Kwame Dawes, professor of English at the University of Nebraska (and former Carolina professor) lectured on "Movement of Jah People: Bob Marley’s Lyrical Genius." Dawes penned a book, titled “Bob Marley: Lyrical Genius,” that is held out as the authoritative study of the lyrics of Bob Marley. Dawes shared with participants about Bob Marley’s music and his cultural influence on politics and societies within and beyond his home of Jamaica.

In April 2018, the series "Celebrated Our Stories" by featuring the documentary work of three filmmakers: Denise McGill, Saleem Reshamwala and Lauren Waring Douglas. The forum included a viewing of three documentary films, “The Gullah Project,” “Dining Room,” and “When Porgy Came Home.”  The films and discussions that ensued told stories about communities in the Carolinas, our challenges and commonalities.