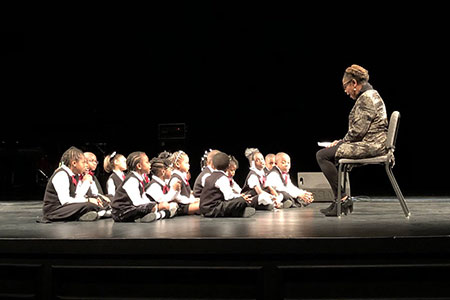 During the 2018 Freedom Rings performance, a chorus of schoolchildren led the audience in a rendition of "We Shall Overcome." Local young artists will also be featured in this year's event.

The University of South Carolina’s MLK Weekend culminates Sunday (Jan. 20) with Freedom Rings, an artistic celebration of Martin Luther King Jr.’s life and legacy. The university partnered with the Columbia nonprofit Auntie Karen Foundation to bring together Midlands musicians, artists and spoken-word performers to honor the civil rights leader in an event designed to bring the audience to its feet.

“The team has worked extremely hard to ensure this family-friendly community event will be a fitting tribute to Dr. King. Great thought went into planning by providing a program that has something for all ages to enjoy,” says Karen Alexander, president of the Auntie Karen foundation.

“I am so honored to be a part of this longstanding tradition of honoring Dr. Martin Luther King Jr. at the University of South Carolina. As a proud Gamecock, it's great to know that our school is committed to issues that Dr. King fought for like diversity and inclusion.”

The event loosely centers around the theme “the beloved community,” King’s vision in which all people share in the wealth of the earth together. The phrase was coined by 20th century philosopher-theologian Josiah Royce, and King adopted it as part of his philosophy of nonviolence. Featuring performers not just from UofSC, but also the greater Columbia area, Freedom Rings aims to bring together the beloved community in its own backyard.

“Those who lack appreciation for diversity tend to nurture the idea that what they label as ‘bad’ will, if not resisted, assert itself. Basic receptivity is compromised when variant viewpoints are automatically relegated to being unquestionably ‘wrong’ and therefore ‘bad,’” says Stan Brown, UofSC theater professor and co-producer of the event. “The beloved community fosters appreciation of diversity.  It's just as important now as it was when Dr. King spoke about it.”

With performances from acts such as John Lakin, Big Redd, The Watering Hole and A Touch of Faith, and emceed by Tre Tailor and Wally “Famous” Amos, the night promises to be a meaningful and rousing experience for all ages.

UofSC has been celebrating MLK weekend for more than 30 years, beginning three years before King’s birthday was declared a national holiday. In January 1983, the UofSC Black Alumni Caucus sponsored the first university program. In 1986, the program was expanded and moved to the Russell House Ballroom featuring King’s daughter, Yolanda King, as keynote speaker. In 1999 then-President John M. Palms canceled classes and declared the day a universitywide day of service. That tradition continues today and has expanded into a four-day series of events featuring a panel discussion and film screening, a commemorative breakfast and a day of service in addition to Freedom Rings.

Freedom Rings will be held in the Booker T. Washington Auditorium at 6 p.m. Sunday (Jan. 20). Tickets are $5 for UofSC students and $10 for faculty, staff and the public. See the lineup and purchase tickets at the university's MLK website.