South Carolina theater alumna pursues her art on her schedule 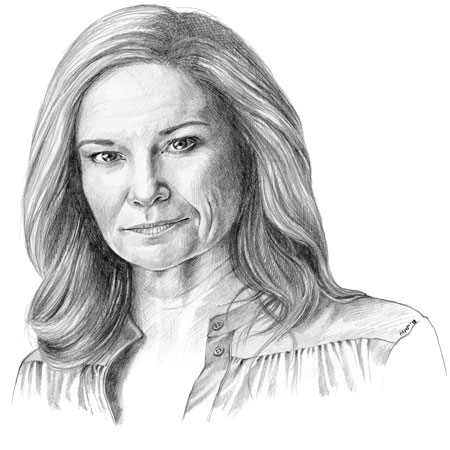 Monica Wyche decided to pull up stakes and chase her dream of being a professional actor in New York City about 20 years after many of her peers made the leap. The delay, though not intentional, may have worked in her favor.

“I was just getting here when many actresses my age who had come here in their 20s were giving up and leaving,” Wyche says. “That created an opening for me with casting agents who were looking for someone in their 40s.”

In less than a decade in New York, Wyche has compiled an impressive list of television and movie credits, including the Hulu series “The Path.” But Wyche also has collaborated on inventive theater projects with her husband, Dean Poynor. She credits her experiences at the University of South Carolina for setting her on the path to always growing as an artist.

Wyche started her acting career while she was an undergraduate student at the College of Charleston. She took a break from school to tour with Chopstick Theater.

“I thought, ‘Why should I go to school when I am already getting paid to work as an actress?’ ” she says. “After a while, I came to my senses and moved back home to Columbia.”

She started studying theater at South Carolina and won a prized internship with the Milwaukee Repertory Theater. After graduating in 1996 with a degree in theater, she went straight into graduate school and began working with Robert Richmond, who was just starting to do guest-directing in the theater department at South Carolina.

“Monica was an excellent student, brave and courageous,” Richmond says of his former student. “I directed her in ‘The Oresteia’ at USC and she shone — so much so that she was invited to become an intern with Aquila Theatre Company in the third year of her MFA.”

Wyche toured for a year with Richmond’s company, performing in “Comedy of Errors.”

“Being on tour with him for a whole year was a master class,” Wyche says. “It was a wonderful experience. I got to see the country and learn what it takes to do the same show over and over again, night after night.”

After completing her MFA in 1999, Wyche went west and began teaching at Montana State University. She then moved to Chicago and was a working actor there. But then came the terrorist attacks of 2001.

“I was single and felt alone after 9/11 and I decided to come home to get closer to my family,” she says.

Wyche taught at E.L. Wright Middle School and Blythewood High School in the Columbia area. She also acted in commercials in Charleston and did shows at the Columbia theater, Trustus, where she met her future husband.

“I think my graduate degree helped get me into a lot of auditions,” Wyche says.

She and her husband decided to try creating their own show and performed it in Key West. The success there led to a leap of faith for the couple to move to New York City.

“I was 40 years old when I moved to New York,” Wyche says. “Now I have a 6-year-old. I am getting steady work and my husband and I are doing a play that he wrote.”

Wyche and her husband took their play, "Together We Are Making a Poem in Honor of Life," to Piccolo Spoleto in Charleston last spring and performed it in October at the 2018 New York International Fringe Festival. The story focuses on a married couple navigating the support group system after losing a child in a school shooting.

The play and the couple’s performances received positive reviews.

“Monica has chops for tragedy and comedy,” Richmond says. “She radiates a presence on stage that is powerful and very watchable.”

Wyche says her education and experiences at South Carolina taught her most how to be a lifelong student.

“I think my time at USC really prepared me for a life as an artist,” Wyche says. “If I’m not in a show, I’m taking a class. I feel like when I’m in a class, more auditions come my way. It’s simply an ongoing education, whether you are acting or teaching, you are never done learning.”