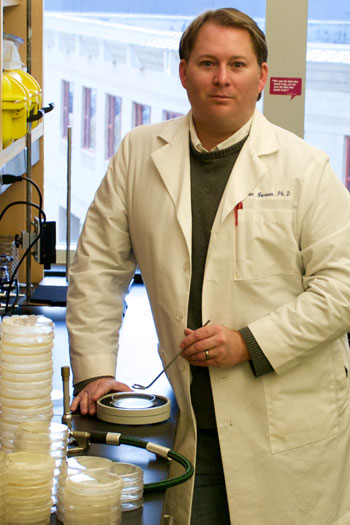 Sean Norman has a new Centers for Disease Control grant to investigate environmental pathways for the spread of antibiotic resistance bacteria.

Antibiotic resistance, a public health threat that already endangers millions worldwide, is on track to become a much deadlier problem in the years ahead.

Part of the challenge, says a University of South Carolina public health scientist, is that bacterial resistance to antibiotic medications is fostered not only in clinical settings but also in the environment, where its routes of exposure and transference are poorly understood.

“A lot has been done to understand antibiotic resistance in hospitals and other clinical settings, but we have just a little bit of information — a drop in the bucket — about how that resistance cycles in the environment,” says Sean Norman, a professor in environmental health sciences in the Arnold School of Public Health who is using a grant from the Centers for Disease Control to address the topic.

There are multiple causes for increasing global levels of antibiotic resistance, including humans not taking proper dosages, health care providers overprescribing the drugs, and the use of antibiotics for agricultural practices. The problem is even worse in countries with few regulations where antibiotics can be purchased over the counter and indiscriminately administered to humans and on farms.

“Now you have farm animals harboring bacteria that have resistance to some of the same medicines we use for ourselves,” says Norman, who is focusing his CDC grant on a major link in the environmental chain of antibiotic resistance — wastewater treatment plants.

When humans or animals take antibiotics, large portions of the drugs pass through their digestive systems unmetabolized and ultimately end up in a waste stream. Wastewater plants effectively degrade organic waste but aren’t designed to break down pharmaceutical agents or the bits of sloughed-off DNA that can encode antibiotic resistance.

Norman has conducted extensive research on a phenomenon that regularly occurs when air is injected into wastewater to stimulate its breakdown. The bubbles rise to the surface and pop, releasing minute amounts of material into the air — called bioaerosols — which can drift away on wind currents.

What we’re trying to determine is the potential for the dispersal of antibiotic resistance to get out into the environment and then if that resistance might cycle back into society.

“While antibiotic resistance in liquid wastewater has been examined by us and others, we are one of the first groups to examine if that resistance might be released through the generation of bioaerosols,” Norman says.

Norman’s study will focus on workers at wastewater plants in Columbia and Charleston to determine if bioaerosols might provide a route of human exposure to antibiotic resistance associated with that environment. Researchers will collect air samples from around the facilities and nasal swab, sputum and stool samples from the workers to determine the presence of antibiotic-resistant bacteria. They’ll do similar testing with workers at drinking water treatment plants.

If that proves to be the case, it would demonstrate clear evidence for the risk associated with antibiotic-resistant bacteria transferring from liquid into air then into people.

“Wastewater treatment plants have generally been very receptive of this research and more than happy to help out, because they know that they are at the forefront of public health efforts,” Norman says. “They are always interested in the knowledge we’re discovering.”

And while that knowledge might be disconcerting, it’s an important step in determining how to limit some of the pathways that promote spread of antibiotic resistance, Norman says.