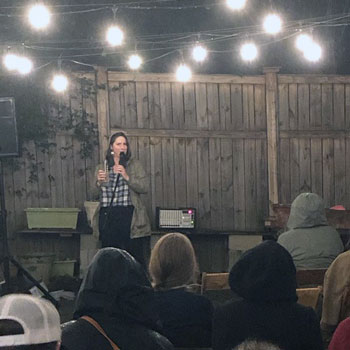 A man in a suit stands at a microphone, describing the night he and some high school buddies nearly burned down their hometown shooting off fireworks. A woman in jeans describes her prom night — and the fake parents her date introduced her to aboard a pleasure cruise in Charleston Harbor.

Welcome to CAST, the Carolina Archive of Storytelling. On the second-to-last Thursday of each month, at Columbia’s War Mouth restaurant and bar, the Columbia, S.C.-based nonprofit hosts an open mic event where amateur storytellers share personal narratives with nothing to lean on but a microphone, their memory and the vocal support of a standing room-only crowd.

The idea didn’t originate in the Midlands. The Moth, a now-famous New York-based nonprofit dedicated to the art of storytelling, has been running such events for more than 20 years, and in recent years similar organizations have sprung up all over the country. CAST, though, has its own identity, and it’s distinctly local.

Run by two married couples, including three University of South Carolina alumni, CAST is wedded very purposely to the greater Columbia community, and dedicated to the preservation of stories told by the people who call the Midlands area home.

That was a conscious decision, says co-founder Amanda Windsor (’10 public relations). The Westminster, S.C. native discovered live storytelling in Madison, Wis., while her husband, Phil, was in graduate school, and she saw firsthand how it fed — and fed off of — the local community.

“There was a storytelling group up there called Madison Storytellers, and one day I went to an event with a friend specifically to do the open mic,” Windsor explains. “My friend did it first because I was chicken, but I’m also very competitive, so I had to get up and do it, too. And once I did, I was hooked. I loved it.”

So she did it again. And then again. And again. And when the event’s organizer invited her to cohost, Windsor took him up on the offer and began learning the ropes. It became a big part of her life, and when she and her husband moved back to Columbia and moved in with another couple — alumni Josh and Sam Rainwater — the interest was rekindled when they discovered a mutual appreciation not just for storytelling but for community building.

“My husband and I left Columbia for a few years and then made a conscious decision to move back,” says Windsor. “I think in your 20s, a lot of people get that itch, like you have to go out and see what’s out there. We reached that juncture and consciously decided to be a part of making Columbia a rich cultural place, somewhere that other people will also want to live. CAST was just one of several ideas we cooked up as a group sitting around the dining room table.”

Now, Amanda Windsor and Samantha Rainwater (’12 English and ’13 masters, education) share hosting duties at War Mouth. Samantha’s husband, Josh Rainwater (’13 media arts), handles the technical aspects of running the PA. Phil can be seen in the back, selling T-shirts. The night isn’t about them, though. It’s about the eight storytellers who brave the mic — six of whom sign up in advance plus two who, caught up in the spirit of the evening, throw their names into a hat.

“Most people who haven’t got up and told a story assume they will be terrible at it,” says Windsor. “They say, ‘I don’t have any good stories’ and ‘I won’t do a good job.’ Well, the first is a lie. Everyone has amazing stories. The second is just because they haven’t tried it. We really believe that if they’re sincere, anyone can do this.”

And that sincerity is critical, to the stories and to the event itself. Just look at the audience, which cheers on every single storyteller, whether the story bombs or blows everyone away.

“From the beginning, every audience that we’ve ever had has been incredibly gracious with the storytellers,” Windsor explains. “Sometimes people get up and they’re amazing, and that’s fun for everybody. Sometimes people are visibly, physically nervous in a way that the whole room can feel, and the crowd is always extremely supportive and encouraging — lots of ‘woo-hoos!’, lots of clapping. No one throws tomatoes.”