Engineering professor believes in the power of nuclear energy

Travis Knight has had a bit of a winding career through the nuclear power industry, including losing a dream internship at the Argonne National Laboratory-West and seeing plans for new nuclear reactors in South Carolina come to a halt.

But his belief in nuclear as a key component in the world’s green energy future has never wavered. To that end, he helps prepare graduates of his University of South Carolina nuclear energy program to become leaders in an industry that is still an economic driver in the state.

“I genuinely believe that nuclear energy can do the things we say it can,” Knight says. “That it is sustainable, that it is clean, that it has all those attributes that we as engineers and proponents in the field say it has.”

Nuclear is reliable, emission-free and economical, he says, adding that it also helps provide a diverse portfolio of energy sources.

We are doing a good service, both in the research we are doing and the grads we are turning out, and I don’t see any change in the foreseeable future for that.

More than anything, though, Knight thinks there should be a continued emphasis on using nuclear energy across the country to help keep the U.S. a leader in the field.

“The genie is out of the bottle,” he says. “We need a seat at the table around the world. We don’t want to be playing second fiddle to anybody. We want to remain the preeminent nuclear academic, industrial and innovation country. That needs to be our hallmark.”

At the University of South Carolina, Knight has been working since 2004 to make sure that the U.S.’s seat at the table is filled with responsible, world-leading nuclear engineers. As the program director of the state's only graduate nuclear engineering program, Knight has prepared graduates for successful careers with companies such as Progress, Duke Energy, Dominion Energy and Westinghouse. As of May 2018, the state of South Carolina was the second-largest employer of nuclear engineers in the country and the demand for the program’s students reflects the industry’s aging workforce and need for new leaders. 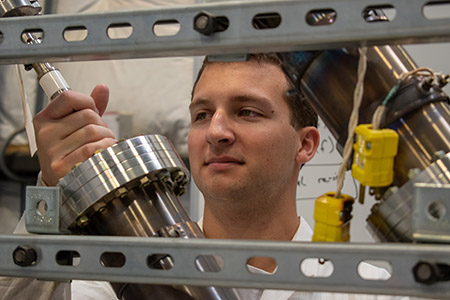 “We are doing a good service, both in the research we are doing and the grads we are turning out, and I don’t see any change in the foreseeable future for that,” he says, adding that almost all of his students are receiving multiple job offers upon graduation.

On the research side, professor Ted Besmann is working with the Savannah River National Laboratory on how to improve the efficiency and effectiveness of nuclear waste disposal through an $8 million partnership between the university, Savannah River and six other partners.

“While we have our eye on the future and the important role that nuclear can play, we also have in our state the reality of managing the legacy nuclear waste at the Savannah River Site,” says Hossein Haj-Hariri, dean of the College of Engineering and Computing. “This counterbalancing of innovation with sustainability is at the heart of modern engineering education and is more and more featured in our curricula.”

Knight also is studying how best to manage used commercial fuel. He has a $4 million grant from the Department of Energy to build the only full-length used fuel research facility in the world. This one-of-a-kind facility gives students the unique opportunity to work hands-on with the exact hardware used in nuclear fuel assemblies and storage canisters — a big plus when students talk to potential employers.

“University of South Carolina engineering graduates are well-regarded for their knowledge upon entering the workforce, professionalism and work ethic,” says Patrick Flynn, a lead communications consultant for Duke Energy. “Some are among our most respected employees.”

Knight knows he can’t change the entire state’s perception of nuclear energy, especially with the recent failure of the effort to build two new reactors in central South Carolina. But he and Besmann want to emphasize the economic importance nuclear energy still has in the state.

“If South Carolina wants to join the states where their industries are at the higher end of the technology spectrum, where they attract the higher paid individuals, then this is one of the technological areas where we already have a leg up,” Besmann says. “So rather than playing catch up with Silicon Valley, let’s play to our strengths where we already have this very significant investment and commitment in nuclear technology.”