Awards can be career-changing, but require rigorous proposals

If you’re a junior faculty member, landing that first external research grant is a game changer, a jump-start for your research agenda.

But getting a National Science Foundation CAREER award is a career changer. The highly competitive awards for pre-tenured junior faculty in STEM disciplines provide a five-year funding stream and take most of the worry out of gaining tenure. The only catch — and it’s a big one — is that CAREER awards are hard to come by. 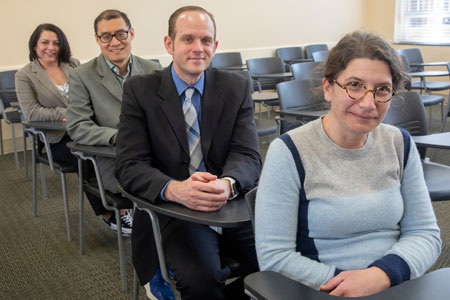 “You are competing against all other junior faculty at all other institutions in the U.S.,” says Hanno zur Loye, associate dean for research in the College of Arts and Sciences and a professor in the Department of Chemistry and Biochemistry. “It’s not like they earmark some for South Carolina and some for MIT. Everyone is competing in the same pool. In a typical panel, maybe 10 to 20 percent get funded on the first consideration.”

Since 2015, 12 faculty members have received the NSF CAREER award, hailing from the College of Arts and Sciences (7), the College of Engineering and Computing (3), the Arnold School of Public Health (1) and USC Aiken (1).

The College of Arts and Sciences encourages all of its assistant professors in STEM fields to apply for the CAREER award, zur Loye says, but there’s no expectation that everyone will be successful. “We encourage them not to apply the day they arrive because they need to get settled in and take their time to write a good proposal,” he says.

That’s because CAREER award proposals, unlike typical research grants, must pitch not only exceptional research ideas but also outstanding educational components that go beyond what is normally required of faculty members.

“Having a good outreach component is where the difference comes in,” zur Loye says. “You can have an excellent research component, but if the educational component isn’t equally good, you won’t get funded.”

The CAREER awards grew out of a program called the Presidential Young Investigator awards, which tended to favor large and Ivy League institutions because the awards were based on recommendation letters and the reputational strength of those who signed them. Changing the program to its current criteria in which proposals are judged based solely on the strength of their scientific ideas has leveled the playing field, zur Loye says.

“You need a proposal that has impact, where people say, ‘Yeah, that’s really cool.’ And it needs to not cost too much money or take up all of your time,” zur Loye says. “And, ideally, it’s sustainable so when the grant runs out, you don’t stop. Hopefully, you keep doing the project.”

That’s the plan for the university’s four NSF CAREER Award recipients from 2018. Here’s what they’re up to.

Rolling on a river: Understanding riverine behavior is key to future

When she looks at rivers, Enrica Viparelli takes a decidedly long and broad view. The assistant professor of civil and environmental engineering considers all of the human interventions from the past 50 years or more that have shaped a river’s contours over the course of dozens of miles. That big picture approach helps her to imagine where a river’s meanderings might take it 30 or 40 years from now, a necessary step to plan for change or prevent future problems.

“You start seeing how a river system adjusts over time — maybe not in five years, but in 50,” she says. “And the river does not always want to do what you like.”

Predicting where a river is going requires knowledge and understanding of sediment and its transport, the focus of Viparelli’s CAREER award proposal. She’s looking at how a river’s transport of sediments is altered by changes in adjacent land use; the introduction of built structures such as bridges, adjacent roads and river straightening projects by the U.S. Army Corps of Engineers; and by climate change.

“Changes in sediments can be fast or slow — deforestation can cause it quickly,” she says. “A river has to adjust to changes, and it’s anything but trivial in how that takes place over time. Ultimately, we have to know how to live with a river.”

The educational component of Viparelli’s CAREER award involves a collaboration with Congaree National Park near Columbia, where her students are gathering all of the environmental data that’s been collected in the past 20 years at the riverside park, much of it by university researchers.

Extreme computing: Breaking through the memory wall is key to speed

Simulating complex science phenomena, molecular interactions and aircraft in flight is possible with high-performance computing. But to move beyond those complex operations, the computing industry will have to achieve what’s called extreme-scale performance — computers that can execute at least one exaflop (or a quadrillion calculations per second), namely exascale computing.

One of the challenges to reaching exascale, says Yonghong Yan, is overcoming the hardware memory wall, the gap between the speed of computation performed by a computer and the speed of supplying data to the computer from its memory systems. Currently, the latter operation is about 100-times slower, which brings the average efficiency of a high-performance computer below 60 percent.

Yan, an assistant professor in the College of Engineering and Computing, has focused his CAREER award research on developing programming systems for existing
and emerging memory to meet the need for speed in extreme-scale parallel performance computing.

“Future memory systems will be very complicated — they’re already complicated now,” he says. “Parallel programming has been challenging, for both high-performance computing personnel and domain experts. They have to deal with the performance and programming challenges of memory systems and parallelism, and make sure their programming can work across different computer architecture, including future architectures. It’s a challenge for industries and academic research and national labs.”

Yan hopes to address that challenge by developing a memory-centric programming paradigm for helping achieve extreme-scale performance of parallel applications with minimum impairment to programmability. The education component of his award includes hiring graduate, undergraduate and even high school students to work on the project and eventually become part of the next-generation workforce in the field of extreme-scale computing.

By the numbers: Mathematical modeling of mucus has implications for medical research

Not many math professors can say they have a laboratory in the biology department. Even fewer can lay claim to an undergraduate degree in petroleum engineering and a post-doctoral fellowship in chemical engineering.

But Paula Vasquez says taking the “scenic route” in her educational journey refined her ability to combine experimental data with theoretical modeling and numerical simulation. And the result is a powerful research focus on mucus modeling that has important implications for cystic fibrosis research and other health conditions. Vasquez’s CAREER award-funded research involves coupling microscale experiments in the lab with numerical modeling of power gels, which manifest as mucus in the human body.

“In our experiments and mathematical modeling, we’re interested in what changes are doing to the mucus — is it making it thinner or thicker?” she says. “If we can develop good, reliable models, then we can say this is what’s going to happen if you change this or that variable.”

Vasquez’s ultimate dream is to develop computer models that are sophisticated enough to diagnose a patient and determine the best treatment path — a personalized medicine approach using a big dose of technology.

The CAREER award is also enabling Vasquez to mentor students in the South Carolina Alliance for Minority Participation program and to launch a Women in Science luncheon that brings together undergraduate and graduate female students in the STEM fields with the objective of inspiring larger numbers of female undergraduates to pursue graduate study.

Imagine an electric car that can travel 300 miles. OK, that’s not hard to do — Tesla already makes one. But what if you could recharge the batteries on that car in five minutes instead of the usual 40 — a game changer, right?

Stefik’s lab is looking at an emergent material that shows promise of fast charging capability while exploring ways to manipulate its geometry to have high energy density at the same time. The material, called niobium oxide, requires further testing of its nanoscale properties, but “you can’t ask those questions unless you can make it in a systematic way,” he says.

To that end, Stefik’s lab has developed several patent-pending techniques that allow fabrication of nanostructured materials with very precise alterations for comparison purposes.

“So, we can make 20 samples in a row, and we’re going to measure them all and see how they work,” he says. “All of them have the same pore size, and we can adjust the wall thickness to a 2-angstrom resolution between samples, which is about the size of an atom. You can’t hope for much better.”

Ultimately, Stefik is hoping his team will devise a precise structure that will unlock niobium oxide’s potential as a novel building block for energy storage. His CAREER Award is supporting not only that research but also an outreach project that brings students from South Carolina and other state universities together to learn how to use X-ray scattering instruments to make precise measurements. The samples they’ll use for measuring? Stefik’s precision building blocks.

Topics: Faculty, Research, College of Arts and Sciences, College of Engineering and Computing