Gary Gardiner was a freshman place kicker on the 1988-89 University of South Carolina football team, and Sudeep Menachery was a high school senior that year who was bound for South Carolina in the fall.

That was the extent of their garnet-and-black connection until nearly 30 years later when their paths crossed in an emergency room in Fredericksburg, Virginia. 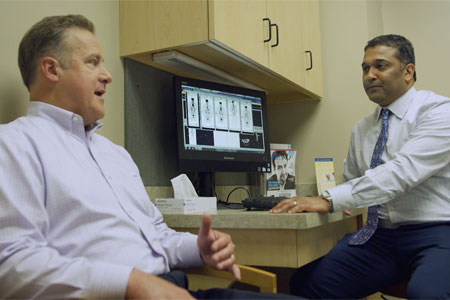 Gardiner, a detective turned real estate broker, checked in with symptoms that would ultimately prove to be an aggressive form of lymphoma. Menachery, an oncologist, was assigned to the case.

“We could have ended up with anybody, but Dr. Menachery happened to be on call,” says Gardiner, who transferred from Carolina after his freshman year but remained a loyal Gamecock fan.

During an appointment at Hematology Oncology Associates of Fredericksburg, Gardiner learned from the staff that Menachery was a 1993 Carolina graduate, and he began thinking of his doctor as the quarterback who would orchestrate a game plan to save his life. But when Gardiner’s diagnosis of non-Hodgkins lymphoma didn’t respond as expected to chemotherapy and continued unabated after radiation, the odds weren’t looking good for a comeback.

It was about that time that Menachery’s staff came up with an idea to bolster Gardiner’s spirits. At his next appointment, they wore Gamecock jerseys and had the theme music from “2001: A Space Odyssey” playing, and Gardiner felt he was on the winning team.

“They knew he was a huge Carolina fan,” says Menachery, who earned a degree in biology from South Carolina. “And they know that social support can be almost as important as the medical care itself — sometimes we play cheerleader.”

Fortunately, there was something to cheer for. Menachery had been following a new clinical trial called CAR-T, an immunotherapy regimen, that he thought could be the “trick play” to obliterate Gardiner’s cancer.

“Non-Hodgkins lymphoma is the fourth-most prevalent cancer that oncologists see, and much of it is curable,” says Menachery, “The particular type that Gary had was difficult to control, but sometimes timing is everything. The CAR-T immunotherapy came out at just the right time for Gary.”

Gardiner began CAR-T treatment and noticed signs of improvement within days. Eight weeks later, a PET scan revealed the cancer was gone, and more than a year later he remains cancer-free. Menachery found the perfect way to celebrate.

“Hootie and the Blowfish were on their reunion tour this summer, and I had extra tickets for the show in Bristow (Virginia),” Menachery says. “My wife and I invited Gary and his wife, Teresa, to go with us. I couldn’t think of anyone who would enjoy it more.”