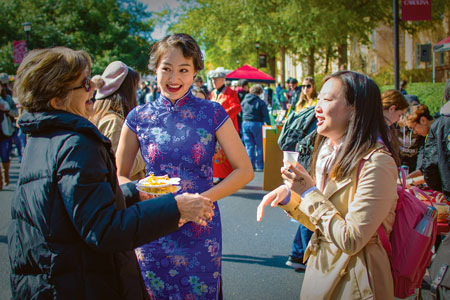 By 1981, when the English Programs for International switched to a quarterly enrollment system, enrollment reached 431 .

Step off the elevators on the fourth floor of the Close-Hipp Building some weekday afternoon and just listen. Spanish, Arabic, Mandarin Chinese — the world’s languages fill the halls. Now step through one of the classroom doors and listen again. The language now? That’s English, spoken by people from around the globe through the university’s English Programs for Internationals.

Yes, EPI, which celebrates its 40th anniversary this year, has come a long way since 1979, when it was created in response to a growing international presence on campus.

In the mid-1970s, the university had admitted 20 Latin American students to the master’s in international business program and 30 undergraduates from Libya to the colleges of engineering and journalism, the latter cohort through a contract with the Libyan government.

When efforts to improve the students’ English language skills proved inadequate, however, the university recognized a need. They brought in a consultant from the National Association for Student Affairs and then formed a task force with representatives from the Colleges of Business, Engineering and Humanities, as well as the Office of Student Affairs.

The university realized from the get-go that the purpose of the program was not just to teach English but rather to promote the university.

In the summer of 1978, the task force recommended the establishment of an intensive English language center on campus, and by year’s end, the university had hired a director, James Murphy, until then the associate director of the intensive language program at Temple University.

“It was really an explosion,” recalls Murphy, now retired but still living in Columbia. “I arrived in January 1979, and the program began in June. I started with 13 students in the intensive language program, and I also managed a summer program for Japanese students. Between the two programs, I had about 30 students that first summer.”

EPI’s rapid ascent owed, in part, to Murphy’s recruitment strategy. Almost immediately, he began contacting foreign embassies, agencies and student placement services around the country, and he made a two-week recruiting trip to Washington, D.C., New York and Boston. He wasn’t merely advertising the new EPI program, though. He was advertising the University of South Carolina.

“The university realized from the get-go that the purpose of the program was not just to teach English but rather to promote the university,” he says. “So I would grab brochures and everything I could from the various departments and take them with me when I presented. At that time, it really helped to get USC more known internationally.”

And his efforts were also well-received on campus.

“The master’s in international business program, engineering, math — these programs already had some international students but they wanted more,” he says. “They were very gung-ho to support a program like EPI.”

Which is not to say there weren’t challenges, notably a dearth of qualified ESL instructors in the Columbia area. The solution, though, paid additional dividends.

Enrollment in the program reached 196 by 1980. By 1981, when the program switched to a quarterly enrollment system, enrollment reached 431. And while the number of international students in EPI would ebb and flow over the next four decades, often in response to global events like the SARS epidemic in 2003—and the directorship would change half a dozen times — the unit has continued to expand its reach and mission. In 2014, it became part of the newly formed Global Carolina.

Today, in addition to the intensive language instruction program, which continues to ready potential international students for study at South Carolina and elsewhere, there are short-term cultural programs run for the U.S. Department of State, teacher instruction programs run in collaboration with foreign agencies such as the Mexican Secretariat of Public Education and a range of language assessment services.

“If you just look at the size of the student population in the intensive language program, then you’re not getting a complete picture of who we are and what we do. That’s a very important part of our mission but it’s not the entirety of our mission,” says current director Wesley Curtis, who took the reins in 2016 after the retirement of longtime program director Alexandra Rowe.