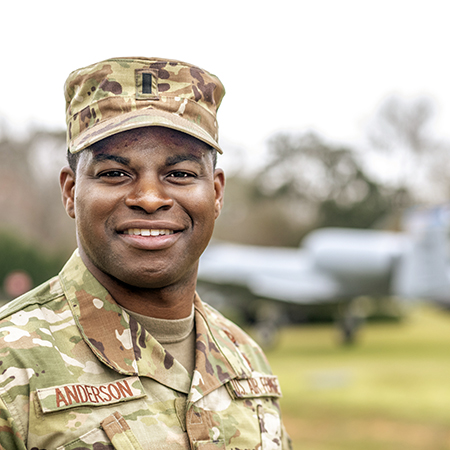 He was also instrumental in starting the Alumni Association’s Veterans Alumni Council, which became the association’s newest affinity group in 2016.

But Anderson’s military career predates his time at South Carolina — and even his time in ROTC, which he joined after a tour of duty in the Air Force and a stint in the reserves. His most meaningful experience in uniform happened back in 2011, when he deployed to Kandahar, Afghanistan.

“When you deploy, you’re actually doing all the things that you’ve been preparing for — you realize, ‘OK, this is serious now, this is game time,’” he says. “It really brings home why we’re doing what we’re doing.”

That’s partly what was going through his head his last semester at South Carolina, when he got the idea for the council. He was on the treadmill, preparing for his final PT test in ROTC, reflecting on the relationships he had made in the military and college.

We haven’t done enough to make our student veterans aware of those opportunities. It’s getting better, but there are still some barriers.

It was anything but a one-man show. Anderson credits a long list of fellow Gamecocks who made the council possible. “Veterans are naturally team players,” he says. “I knew I had to find some strong folks to build this organization.”

He contacted Aubrey Sejuit first. Now the social work preceptor at Limestone College, Sejuit was finishing her Ph.D. in counselor education and supervision and had been an intelligence analyst in the Army Reserve. Next, he hit up the Student Veterans Association, where he recruited a pair of retired Marines: James Hull, who was interested in mentoring possibilities, and Steven Diaz, who pitched in on strategic partnerships.

“It goes down the line until I contacted my now really good friend, Jared Evans,” says Anderson.

When Anderson received a Fulbright and relocated for a year to Ontario, Canada, he asked Evans, a retired Marine, to serve as the affinity group’s first chair. But Anderson’s time at the Centre for International and Defence Policy at Queen’s University (where he earned a master’s in political studies) only fueled his interest in the council.

“Being able to say to an older veteran, ‘Hey, I know you’ve been in the military for four to six years, even 10 years, but you can still get a Fulbright, you can still get a Truman Scholarship’—that’s important,” he says. “We haven’t done enough to make our student veterans aware of those opportunities. It’s getting better, but there are still some barriers.”

Evans, now the university’s director of military engagement, shares the same mission. And he stays in contact with Anderson as the council strengthens the university’s bond with veteran alumni.

“Obviously James has gone on to do great things away from the university, and we’ve become great friends,” says Evans. “I try to keep him posted on everything that’s happening with the council and with the university so that he knows this thing he got going a while ago is still moving in the right direction.”