Carving a path toward justice: Part 2

Our library collections document the determined efforts of African American citizens who publicly challenged the assaults and harassment by military police on the streets of Columbia in World War II. In 1941, the Rev. J.C. Colclough, leader of the Negro Citizens’ Grievance Committee, spoke before the Columbia City Council. He told the council that beatings of African American residents “were nightly affairs” and on Saturday nights “assumed ‘riot’ proportions.”

Our library collections and photographs document the 1946 assault on World War II veteran Isaac Woodard who was severely beaten and blinded by the Batesburg police chief on the very day he was discharged from the military. Columbia NAACP activists investigated, and the resulting national attention led eventually to the desegregation of the U.S. military forces — even though the responsible officers were found not guilty in a federal trial in Columbia.

The Rev. Joseph A. DeLaine Papers document his support for school desegregation in the 1940s and early 1950s, and the financial retribution and Klan violence his family endured as a result (see banner image at top, .J.A. DeLaine Papers, South Caroliniana, University of South Carolina  Libraries). Law enforcement looked the other way when arsonists burned his Lake City church. And when the Klan repeatedly assaulted his home, they tried to arrest him for defending his family.

In Orangeburg in March 1960, police unleashed fire hoses and tear gas on hundreds of students walking orderly two-by-two from the Claflin and South Carolina State campuses through the city. Firefighters knocked down a blind woman and pushed her with the water force along the street. Police arrested 350 students and jailed the drenched petitioners in the open winter air. That demonstration made the front page of The New York Times. 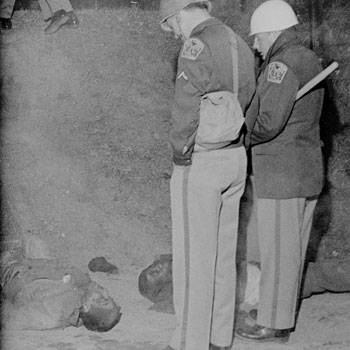 Patrolmen look at two students shot in 1968 when police killed three men and shot and injured 27 students in Orangeburg. From the Bill Barley Collection held at South Carolina Political Collections.

In 1961, student activist Lennie Glover was stabbed and nearly killed in broad daylight while conducting a sit-in in a downtown Columbia store. His attacker was allowed to escape and never arrested. In 1968, college students in Orangeburg, simply trying to have the Civil Rights Act of 1964 enforced so they could patronize a bowling alley, were assaulted by state police troops in an unprovoked attack. The police killed three young men and shot another 27 students as they ran away from the troops.

While these histories are featured in the Civil Rights Center’s Justice for All online exhibit and in an upcoming permanent display in the Booker T. Washington High School Auditorium building, we strive to do more beyond the campus to connect these past events with contemporary struggles. That is precisely why we have worked in public schools, trained teachers and conducted workshops, tours and presentations with youth groups, churches, state agencies and social justice organizations.

While police brutality is the most pronounced factor motivating many today, we should be reminded that it is one among a list of grievances, including voting rights and vote suppression, declining schools, housing discrimination, environmental racism, jobs and wealth inequality and health inequities made even more visible by the countless number of African Americans and poor people who have suffered and died over the past several months during the COVID-19 crisis. And to be sure, many citizens are galvanized by what they rightly see as the failures of leadership, especially by President Trump, who has marked demonstration participants as thugs and terrorists.

The student movement of the 1950s and 1960s often featured highly organized, planned and structured demonstrations. Established organizations, such as the NAACP, CORE (the Congress of Racial Equality), SNCC (Student Non-Violent Coordinating Committee), and the SCLC (Southern Christian Leadership Conference), conducted extensive workshops where students were trained in non-violent direct action tactics. Our civil rights collections housed in University Libraries contain a number of examples of what was discussed and taught. For example, the datebooks of James T. McCain, a CORE organizer from Sumter, detail planning for various demonstrations, including the 1961 Freedom Rides. And a new collection, the B.J. Glover Papers, describe logistics for the Charleston Movement and the March on Washington. The John McCray Papers have documentation on the 1946 Southern Negro Youth Congress at the Township Auditorium, where young student activists learned strategies and organizing skills.

During the course of the post-World War II civil rights struggle, African American high schools, colleges and universities played a vital role in the movement, giving students a gathering place, the training ground and the freedom to discuss, strategize, plan and mobilize demonstrations to break the back of Jim Crow practices.

In South Carolina, when the government met the demonstrations with violence or mass arrests, the NAACP and other organizations supported students with bail money and legal representation. For example, in March 1961, students marched from Columbia’s Zion Baptist Church along four planned routes to the State House and around the grounds, where they began to sing and dance to bring attention to continued legal segregation in the state. Police denied them their rights of assembly and petition, arresting nearly 200 people. But the U.S. Supreme Court overturned the arrests in the 1963 Edwards v. S.C., ruling 8–1 that the Constitution “does not permit a State to make criminal the peaceful expression of unpopular views.” Marching and arrested that day was a young man from Sumter named James Clyburn, now a ranking member in Congress.

This landmark ruling resolved a constitutional issue that protesters are not responsible for the behavior of hostile onlookers and set the legal foundation for future public protests, including the Occupy Movement at the South Carolina State House in 2011 that relied on Edwards v. S.C. to enforce their right of assembly. The state government’s police actions in denying protesters their rights cost South Carolina $192,000 in a civil settlement. 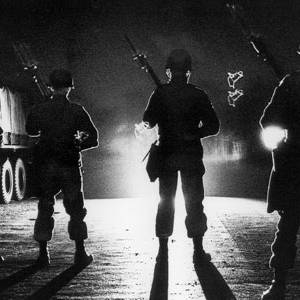 Guardsmen photographed at the Orangeburg Massacre in 1968. From the Bill Barley Collection held at South Carolina Political Collections.

The 1961 demonstration planning was part of a long campaign of resistance to segregation and Jim Crow practices. Segregation was pervasive across all aspects of life, enforced by harsh and sometimes brutal treatment from police, and that made Jim Crow laws the most prominent target of protest.

Only a month after the Edwards ruling in 1963, Malcolm X visited Columbia on a speaking tour, providing a searing indictment of police brutality, non-violence and integration. State politicians intervened to bar Malcolm X from the Township Auditorium reserved for his address, then they pressured black businessmen to deny him the Masonic Temple in West Columbia, so he spoke in front of 70 people (and television and newspaper reporters) at the Waverly Muslim Temple.

One aspect that has changed significantly is communications and media coverage. In the earlier Civil Rights period, many organizers planned demonstrations with the hope of gaining the attention of newspapers and television news outlets. They supplemented their work with press releases but had no control of the stories that would appear in the general press. More representative accounts appeared in national black newspapers such as the Chicago Defender and the Pittsburgh Courier, and regional newspapers such as the Baltimore Afro-American, Norfolk Journal and Guide, and the Atlanta Daily World, treated the activists, rather than just police and government officials, as news sources. Internal publications such as the NAACP’s The Crisis magazine and CORE’s CORE-Lator newsletter informed activists in an unfiltered way. In the 1970s, powerful newspapers such as the Charleston Chronicle and Black On News and the African American-focused “Awareness” program on WIS-TV emerged to bring the demonstrators’ message to the public more frequently and with greater attention.

Today, with phone video and social media, people have the ability to expose police violence and to publish original documentation of it and then to comment on it as well. Social media galvanizes attention and makes an efficient channel for promoting and organizing a protest rapidly. The decentralized nature of Black Lives Matter is similar to the energy of the student movement of the 1960s but it is wider, more diffuse, amorphous, and intentionally designed around a group-centered leadership model. In the 1960s, students created their own institutions, SNCC and many others, and drew important support from the NAACP. The alliance with the NAACP brought money, legal defense and other resources but also complications and conflicts over strategy. Together, they helped sustain the movement when segregationists — from white mobs to governors — attacked. An open question is how the message of this moment will be sustained.

White supremacy did not die in the 1960s, and we’re seeing a troubling resurgence of white nationalism and its support from the White House. The president echoed the words of a segregationist police chief when he said, “When the looting starts, the shooting starts.” But the president was just making plain and visible the strategy that Republican politicians developed in the 1960s to rally anti-black animus among voters with coded language, cloaking racist appeals in calls for “law and order.” Two South Carolina political strategists shaped national politics for four decades by building a Republican base in the South. Harry S. Dent Sr. was the architect of Richard Nixon’s Southern Strategy, and Lee Atwater advised presidents Reagan and Bush on using busing, states rights, tax cuts and other terms to influence voters and policy debates to favor whites.