When the elevator doors open on the seventh floor of the new children’s hospital in Charleston, South Carolina, you’re immersed in a playful, colorful wonderland. 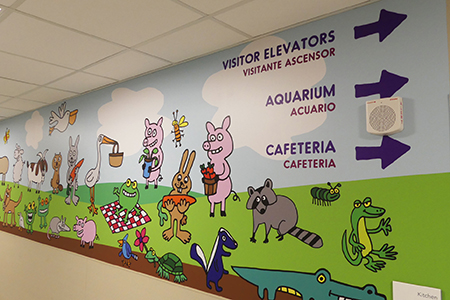 In the hallway of MUSC Shawn Jenkin's Chidren's Hospital, animals frolic at a picnic designed by UofSC professor Marius Valdes.

Line art drawings of otters, deer, turtles and other South Carolina-native animals greet you. They’re joined by some nonnative species, including dinosaurs, Sasquatch and aliens.

Farther down the hall, full-color animals frolic at a picnic and point the way to the hospital’s play area. It’s the exact opposite of stark, off-white and clinical.

“We wanted to let the children know, using artwork, that they were in a safe place," says Betsy McMillan, child life manager for MUSC Shawn Jenkins Children’s Hospital. “The message is clear — this is a place of fun created just for children.”

The art is the vision of Marius Valdes, a University of South Carolina studio art professor in the College of Arts and Sciences. A Charleston native, Valdes wanted to create something that reflected the wildlife of his hometown and brighten the day for children and families.

Valdes got involved with the project when McMillan asked if he would be interested in providing art for the 250-bed hospital that was under construction at the time. When he learned about art’s role in health care, Valdes was hooked.

“I was sincerely overwhelmed,” he says, citing research that shows art can decrease anxiety and depression among patients. “The idea that the audience there would be sick kids who are probably going through some of the worst weeks and days of their lives made it feel like a really special project. I couldn’t think of a more deserving audience.”

Valdes had big ideas for art that would bring a lot of playful color to the corridors. But, ultimately, the hospital commissioned 10 smaller, poster-sized illustrations that would hang in exam rooms. About 30 other South Carolina artists also created works for various rooms and public areas. 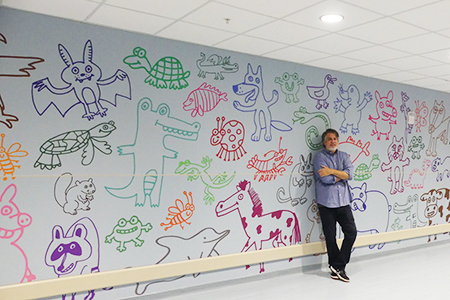 Artis Marius Valdes poses with his mural of line art drawings of otters, deer, turtles and other South Carolina-native animals.

Valdes looked for opportunities to do more and received a $10,000 grant from the College of Arts and Sciences to pay for an additional, large-scale project.

“I thought it would be cool to do something bigger and more involved with the hospital,” he says. “I wanted to make something really cool for the kids."

Consulting with the hospital’s designers and art therapists, Valdes proposed a 100-foot mural in the elevator area on the seventh floor. He wanted to fill it with animals, drawing inspiration from the zoo at Charles Towne Landing State Park.

“I spent my entire childhood playing in that park,” he says. “Having grown up in Charleston, I'm familiar with most of these animals.”

He chose a collage of simple line drawings for the elevator section. “The line drawings allow you to see something different every time you look at it,” he says.

Valdes drew more than 200 original characters for the hospital walls. He scanned his Sharpie-inked drawings and turned them into digital vector art arranged in colorful patterns. The mural was printed on adhesive paper and installed at the hospital this summer. Graphic Design USA awarded the project a Health + Wellness Design Award this month.

Hospital staff liked his work so much that they commissioned Valdes to illustrate a more colorful, immersive mural for another section of the seventh floor. For this project, Valdes drew playful frogs, including many that are experiencing ailments, much like the children who will see them, as well as a mural of animals enjoying a picnic. One sign instructs visitors to “Push button to open door,” and Valdes’s frogs reach for the tempting button like a child snatching a snack.

Valdes likes to imagine children going down the hall playing a look-and-find game. Can they find the otters? Do they see the dragon mingling with the other characters?

He’s also working on a formal activity for the patients. In collaboration with art therapists at the hospital, he will develop something the kids can keep ― like stickers or coloring book pages ― featuring the animals. Long-term, he hopes to find funding to produce a children’s book about the animals on the wall.

“Marius’s artwork appeals to all generations, tastes and audiences,” McMillan says. “Teens laugh at the Big Foot character tucked into the Selfie Station wall and small children point out the animals by name. Additionally, our care team are huge fans, too.

“Marius’s collection of creatures brings out the child in all of us. It brings a moment of joy and escape to all impacted by the stress of medical experiences.”

That’s music to the artist’s ears.