As the nursing supervisor at a Florida children’s hospital in the 1970s, Sister Carol Keehan was filled with ideas. She wanted to ensure that all children received excellent treatment, regardless of a family’s finances. She envisioned programs to improve quality of care and wanted to enhance staff benefits. The list went on.

“But every time I would come up with a really good idea for a new program or improving staffing, I’d get shot down by the finance people,” Keehan says. “And I couldn’t really defend myself on it because I didn’t know how doing this or that impacted Medicaid or Medicare reimbursement or contracting with insurance companies or anything like that.

“I had the world’s best ideas, but I didn’t have the tools to put them through.”

That was about to change, and in a big way — thanks, in part, to the business education she received at the University of South Carolina.

Keehan would go on to lead hospitals. She also became the president and chief executive officer of the Catholic Health Association of the United States, the country’s largest group of nonprofit health care providers. And she has spent her career advocating for just and compassionate health care.

Keehan went to nursing school straight after high school, and later entered the nursing program at St. Joseph’s College in Emmitsburg, Maryland, where she earned a Bachelor of Science in 1968. It took only a week of nursing classes to fall in love with the field, she says, but her commitment to improving health care has lasted nearly six decades. 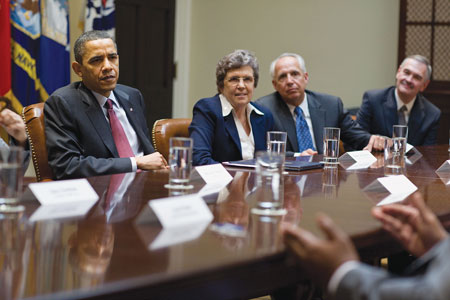 Sister Carol Keehan was a major player in the push for passage of the Affordable Care Act.

Of course, her faith was a major factor. Before she finished college, Keehan joined the Daughters of Charity, a community of Catholic nuns devoted to serving the poor, often through careers in education and health care. The order prioritized education, so she knew her next step would be a master’s degree. She initially planned to attend the University of West Florida — she would take a course or two at a time while she worked as a registered nurse at the children’s hospital in Pensacola — but something intervened.

Fate, timing, providence — whatever it was, it changed the trajectory of her career.

The CEO at Sacred Heart Children’s Hospital, where Keehan was working, had received a mailing from the University of South Carolina and shared it with Keehan. The business school was gauging interest in a master’s program focused on health care financing. This was before the days of online learning, and the university had received a large grant to build a program that would address the specific needs of those already in the field.

Keehan had done well in college, but this was a new kind of challenge. “I certainly didn’t take any accounting to get that degree in nursing,” she says. But the program wasn’t starting for a year; she had time to catch up on the prerequisites. She signed up for a few statistics and accounting classes at a junior college a few blocks from the hospital, aced them, and applied for admission to the South Carolina business school.

“I was a risky student, at best, because I didn’t have the background,” she says, recalling a phone conversation she had with the program’s director before she was admitted.

“He called me and said, ‘You’ve done what we wanted. You’ve gotten good grades in accounting and statistics. I know you can do this, but do you really want to?’  I said, ‘Yes, I do. I’m certain this is what I want to do, for all the right reasons.’ I realized that this would make me a better advocate for children, and a better advocate for the staff who cared for them. And, if I was all those things, I knew we could do a better job of caring for children. They took me.”

Soon, Keehan was in Columbia for a week every two months, participating in a strenuous program alongside students who were already hospital CEOs and CFOs. Classes ran from 8 a.m. until 7 or 8 p.m., with an hour for lunch. “I would run across the back field to the Newman Club on campus and go to Mass at noon,” she says. “Then I would run back and eat a candy bar. I was a hungry chicken by dinner time.”

She credits the program’s top-notch faculty with putting together a program that catered to the students’ real-world needs. She learned about insurance, bond ratings, Medicare and Medicaid reimbursement — all the topics she needed to help her realize her goals.

“The people I studied with were all in the middle of it,” she explains. “You didn’t have people parroting what was in a book or what they read in The Wall Street Journal. You had people who were negotiating with insurers, doing cost reports for Medicare, looking at their bond ratings, dealing with state Medicaid directors, things like that. I was able to bring the perspective of the impact on care. We could help each other. It was an incredibly positive experience.”

After completing the classwork and her thesis, Keehan earned her Master of Science degree in business with a major in health care financial administration in 1980. 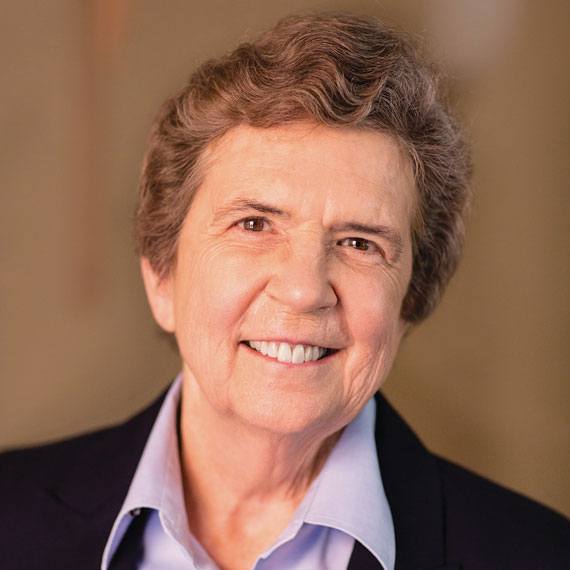 Sister Carol Keehan earned her master's in business administration from the University of South Carolina in 1980.

“I learned a lot. I enjoyed the people immensely. But I really did have to work hard,” she says. “As somebody who moved from that to higher and higher positions, I have always said I could not have gotten a better education than I received at the University of South Carolina.”

That training and experience has served her well for four decades.

“I’ve used my education every day,” she says, “whether I was a vice president for nursing, whether I was the CEO at a couple hospitals, whether I was CEO at (the Catholic Health Association) and particularly when I was working with the White House and Congress on the Affordable Care Act.”

And the University of South Carolina has recognized Keehan in return, honoring her with the Distinguished Alumni Award from the Darla Moore School of Business in 2000 and the Algernon Sidney Sullivan Award in 2009.

As somebody who moved ... to higher and higher positions, I have always said I could not have gotten a better education than I received at the University of South Carolina.

It’s not just the university that’s proud of Keehan’s work ethic and commitment to access. At a 2015 Catholic Health Association gathering in Washington, President Barack Obama thanked her for her advocacy, saying: “We would not have gotten the Affordable Care Act done had it not been for her.” And when Time named her one of the “100 Most Influential People in the World,” the magazine cited her leadership of the Catholic Health Association, her advocacy for the poor and her “unwavering respect for human dignity.”

“Undeterred by her critics, she refused to back down as she fought for reforms that would include prenatal and maternity care and coverage for uninsured children,” the tribute reads in part. “She fought for those who couldn't fight for themselves.”

Keehan retired from the CHA in 2019 after leading the organization for 14 years, but she continues her work on health care policy and financing. Before COVID-19 disrupted travel, she was regularly on the road and in the air – speaking and working with hospitals and health facilities around the country and in places like Lebanon, Israel and Japan. She sits on six boards, including at Georgetown and St. John’s universities.

And she continues to make her voice heard through policy pieces about the future of health care financing, including an extensive piece, “How the pandemic could reshape the U.S. health care system,” that appeared this May in America, a national magazine published by the Jesuits of the United States.

Published as the world reeled from the first wave of the coronavirus, she took the moment to reevaluate our nation’s health care systems and offer thoughts on the future.

“The coronavirus crisis has made it even clearer that there are many areas in the provision of health care that need critical improvements in quality, cost-effectiveness, equity and justice,” she wrote. “The era we are entering will certainly have frightening and challenging moments, but it can also be a time of innovation, greater compassion and hope.”

As someone who has devoted her life to health care — and who has spent many years engaged in the health care debate at the highest levels — Keehan hopes policymakers use the opportunity presented by the pandemic to ensure a healthy future for all Americans.

She cites the complexity of current health care financing and insurance models but is not, she says, advocating Medicare for All. She is also not suggesting that employer-sponsored insurance options or personal choice be taken away but simply calling for innovation and change, and for an informed approach that recognizes our underlying humanity.

Hers is a philosophy born of her faith and her commitment to nursing but also undergirded by a business acumen cultivated at the University of South Carolina. “We are a great nation with smart and dedicated citizens,” she writes. “We can design a health care financing system that is uniquely ours, that focuses on the common good, on equity, and that allows a special sensitivity to the most vulnerable among us.”