In a way, linguistics expert Tracey Weldon has been conducting research for her most recent book — Middle Class African American English — all of her life.

A native of Columbia, Weldon explores the evolution of language spoken by African Americans at home and in the workplace. But, unlike much of the research that has preceded her work, Weldon is looking at variation in the language of middle-class speakers rather than working-class speakers.

“As linguists, we’ve been defining African American English as what we call vernacular varieties that have features that are not part of standard English and that often have a certain amount of stigma associated with them,” says Weldon, an English and linguistics professor who earlier this year was named interim dean of the Graduate School and vice provost for graduate education. “There was that narrow definition and also this assumption that African American English was only spoken by working-class speakers, that middle-class speakers just didn’t use those varieties.

“Many of us knew that wasn’t true, but we really hadn’t done any type of thorough investigation.” 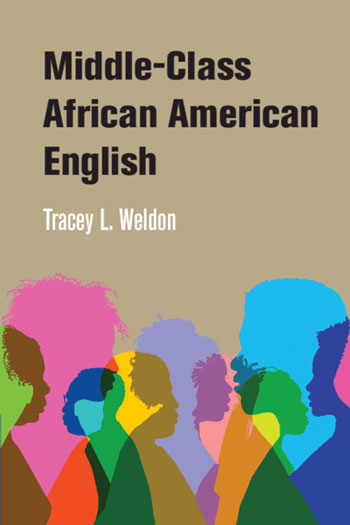 Tracey Weldon tells the story of middle class speakers of African American English from a personal point of view.

Weldon, who also was an associate producer on a recent documentary called Talking Black in America, says her goal with research for her book was to broaden the definition to include what she calls standard African American English and to look at how middle-class speakers use language to express their cultural identities and affiliation with the African American speech community.

The language variation that Weldon studies could be as simple as pronunciation differences such as fishin’ vs. fishing. These types of different pronunciations can be part of a regional accent, but can also reflect social or stylistic factors.

For example, middle-class speakers of African American English might alter their speech in more formal settings compared with more comfortable settings. This alternating between formal and informal speech is a type of code switching — something Weldon has noticed and documented even in her own speech.

“I did something in the middle of the book that really hasn’t been done a lot, and that was a self-study or an autoethnography, where I just told my own story about being a speaker of middle-class African American English,” she says. “And that’s a story you don’t hear because there are not a lot of people like me in the field.

“I thought it was important to tell that story from a personal perspective.”

Weldon noted how her language changed depending on her audience.

“I recorded myself in a number of different contexts, talking on the phone, presenting a linguistics paper at a conference and teaching,” she says. “Then I looked at the ways in which my language shifted depending on my context.”

It is precisely that type of linguistic code switching that originally got her interested in the topic. Watching Tavis Smiley’s State of the Black Union on C-SPAN in the early 2000s, some segments of which were taped in large Black churches, Weldon noticed how speakers would change their language depending on whether they were addressing the more diverse television audience or whether they were speaking to the in-person audiences, which were predominantly African American.

Her research on those presentations became a conference paper that turned into a chapter in her book.

“For those of us who code switch, it’s not a conscious thing unless you have both audiences present,” she says. “Typically, it just kind of naturally happens and it’s something we learn to do from very early on. We absolutely do respond, even subconsciously, to some of the stereotypes that are associated with the language that we speak.”

Those stereotypes are among the issues discussed in the documentary Weldon helped produce, Talking Black in America, which explores how Black language developed in the U.S., first through creolization — that is, a process by which people who do not share a common language create ways to communicate — then through the isolation of Black communities in the decades following the Civil War and the end of slavery.

Those language varieties, while not often taught in classrooms, still have their own rules and systems, Weldon says.

That assumption, however, is inaccurate.

“Because language is used as a tool of communication, by necessity, it is systematic and rule-governed,” she says. “So even those language varieties that don’t show up in grammar books or textbooks have to have a system in place, which means there are good and bad ways of speaking even these nonstandard varieties; you can speak them the wrong way.”

The documentary and Weldon’s work will be the subject of an online discussion hosted by the Center for Teaching Excellence later this month. Participants in Weldon’s webinar are asked to watch the documentary Talking Black in America on YouTube before the discussion, which begins at noon on Feb. 26. Register online for the event.