From ‘Redneck Shop’ to racial reconciliation

It was the spring of 2018 and Regan Freeman was studying in one of the cubicles deep inside Thomas Cooper Library when he stumbled upon a 60 Minutes story. Oprah Winfrey and attorney Bryan Stevenson were touring the National Memorial for Peace and Justice in Montgomery, Alabama, a monument to the thousands of African Americans who were lynched in the 70 years following the Civil War.

Freeman watched the screen as Winfrey and Stevenson paused and looked up at one of the 800 weathered steel monuments, each representing a county in the United States where a racial terror lynching took place. Victims’ names are engraved on each column.

“Eliza Cowen was lynched in Laurens County, South Carolina,” read Stevenson, the founder and executive director of the Equal Justice Initiative and the force behind creating the lynching memorial.

Freeman, a native of Clinton in Laurens County, admits to being “dumbfounded.”

“I’m a white guy. I spent 12 years in public school in Laurens County. Not a sliver of that was taught. There were dozens of people lynched in Laurens County, and it bothered me that nobody talked about it back home,” says Freeman, who at the time was in his final semester as a political science major at the University of South Carolina. “That darker part of history was never mentioned.”

That moment and those words were a turning point in Freeman’s life. It inspired him to join a Laurens County minister and his congregation in a fight for equality and justice. It’s a journey that has picked up momentum in recent months with the release of a movie documenting the history of racial strife in Laurens and coverage of the group’s racial reconciliation work by national media outlets including CBS News and The Washington Post.

Delving into the past

That day in the University of South Carolina library, Freeman’s study session quickly morphed into an afternoon of research. He skipped his next class and spent three hours reading about his home county’s history of racial violence. 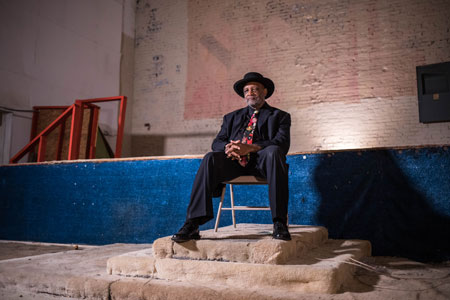 The Rev. David Kennedy has spent his life fighting for civil rights and battling the beliefs of Laurens' Redneck Shop.

That reading led him to stories about the notorious Redneck Shop. Housed in the old segregated Echo Theater in downtown Laurens, the shop was known as the “world’s only Klan museum,” and sold white-nationalist and neo-Nazi paraphernalia. The shop had opened in 1996 — the same year Freeman was born — and stayed open until 2012.

Freeman knew the story of the Redneck Shop in passing, but says he never understood the gravity, believing it was just “a bunch of local kooks.” But as he delved deeper into its history, he learned about the Rev. David Kennedy, pastor of the New Beginning Missionary Baptist Church, who had spent his life fighting for civil rights and battling the beliefs of the Redneck Shop’s owners.

“I went outside of T-Coop and I found the number for Rev. Kennedy’s church. I just called his church and he picked up. I told him, ‘I just learned about this and I’d love to talk to you.’ ”

“Why don’t we have lunch tomorrow?” was Kennedy’s response.

The next day, Freeman skipped another class and drove 60 miles up Interstate 26 from Columbia to Clinton, where he met the man who inspired him with his life story of faith, forgiveness and fights against injustice.

“I told him we’ve got to do something to memorialize these people (who had been lynched). He didn’t know me from Adam. We were talking and he looked me in the face — and I’ll never forget this — he said, ‘Do you want to help lead this?’

“Since then, it’s just been a man possessed.”

Freeman, who earned his degree in political science from the College of Arts and Sciences with a minor in public relations from the College of Information and Communications in May 2018, put his plans for law school on hold. In January, he left his job working at a Columbia law firm and has devoted his life full-time to working with Kennedy and others in the community to turn a building that once was a headquarters for racial hatred into a center for reconciliation, remembrance and education.

The Echo Project is born 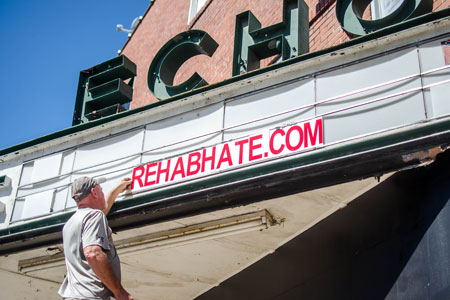 The old Echo Theater is being transformed from a Ku Klux Klan museum into a center for diversity and reconciliation.

The project started slowly; for awhile it was just a bunch of to-do lists in the notes app on Freeman’s phone. In the two years since, The Echo Project has grown into a movement that has raised more than a half-million dollars. Much of that funding has been donated since the release of Burden, a movie that premiered at the Sundance Film Festival and now is available through streaming services and on DVD. It is based on the story of the Redneck Shop — how Kennedy, played by Academy Award-winner Forest Whitaker, eventually helped and befriended one of the original shop owners, former Klansman Michael Burden Jr. When Burden was homeless and broke, Kennedy offered him a home, food and a place to worship. Burden sold Kennedy partial ownership of the Redneck Shop, which ignited a long legal battle before Kennedy and his New Beginning Missionary Baptist Church became the owners of the building when the shop closed in 2012.

The call to action at the end of the film, coupled with the racial reckoning around the country this summer after the death of George Floyd, have resulted in donations from all over the country and the world to the organization’s Rehab Hate website.

There are more than 5,700 donations so far. Some are small — $25 or $50 from individuals with notes like “in the name of unity,” Bible verses and quotes from Martin Luther King Jr. Others are tens of thousands of dollars — contributions from corporations who want to help change the legacy of the Echo Theater.

The now-dilapidated theater, where Kennedy once watched movies from the segregated balcony, still holds remnants of its days as the Redneck Shop. The room is littered with KKK recruitment cards, while Klan robe order forms are tacked to the wall. One wall is covered with a 25-foot tall swastika mural from the days the building was used by the American Nazi Party.

Freeman, Kennedy and the Echo Project’s advisory board are in the process of reviewing bids from some of the country’s top exhibit designers, with the plan to turn the building into a center for diversity and reconciliation; to create a memorial and a living community center.

Freeman, now the executive director of the Echo Project, acknowledges he is new to a battle Kennedy and others have been fighting their whole lives. He says the people who have lived this and fought this in Laurens County for a quarter century are the real heroes, “and I’m just thankful they let me be involved.”

The South Carolina I want to live in reckons with its past and moves forward in a productive way.

But Freeman has also heard the talk and pushback from some in his hometown. “’Why are you bringing that back up again? Why would you display Klan artifacts?’ Rev. Kennedy’s argument, and I agree with him, is you have to tell the truth to reconcile. Racial reconciliation starts by telling the truth.”

So this place, which Freeman calls “the embodiment of evil,” may be a Laurens County story, but it’s also a “universal story.”

“You have this visceral space where you can understand the centuries-long struggle for justice and how this theater fits into that. We’re taking this building from a Klan museum to a center for diversity and reconciliation. I get chills saying that,” he says. “But we’re not just going after the building in Laurens. We’re talking about the universal message of standing against hatred, of choosing healing over hatred.”

Harry Agnew has been friends with Kennedy for more than 25 years, and the two were on the same page about the need to transform the old Echo Theater building. He was with Kennedy at the 2018 lunch when they first met Freeman.

“When Regan came along, he provided the enthusiasm to be the catalyst to put this together,” Agnew says. A former member of the University of South Carolina Board of Visitors, Agnew now is vice president of the Echo Project’s board of directors. “There’s a lot of work to be done in South Carolina. That’s what this project is about."

As he works with others on the Echo Theater in his home county, Freeman says he thinks often about the historical marker at the foot of the historic Horseshoe at his alma mater, which says the university is “a faithful index to the ambitions and fortunes of the state.”

“The Echo Project and what we’re fighting for is a manifestation of that. The South Carolina I want to live in reckons with its past and moves forward in a productive way. Let’s let the Echo Project also be an index to the ambitions and fortunes of South Carolina, and let it help move the state forward.”