Brian and Nicole Cendrowski have traveled a circuitous route to owning their own brewery in downtown Greenville, but what started from a “not awful” batch of beer in January 2007 has turned into a brewery, taproom and kitchen.

Brian jokes that even his years at the University of South Carolina were a roundabout way to two degrees. He started at South Carolina after graduating from Columbia’s Spring Valley High School in 1995, but after two years decided to move to the College of Charleston, where he finished his degree. He came back to Columbia to work in web development just as the internet bubble was bursting. He returned to UofSC to earn his MBA in 2003.

“I've definitely had quite a few starts and stops in my career,” he says. “It's tough to build momentum when you're constantly changing directions, trying to figure it out.”

He and Nicole, a 2002 English and Honors College graduate, have worked in South Carolina and Florida since leaving the university. Their foray into beer-making started as a happy accident. 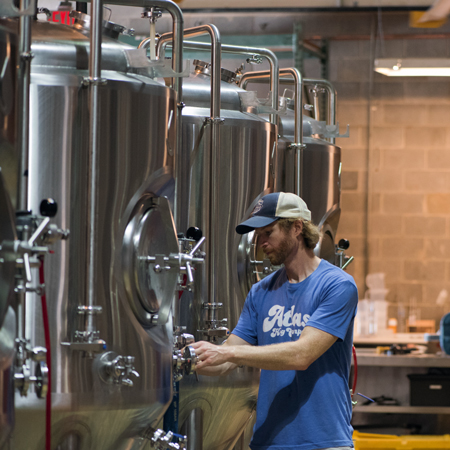 Brian Cendrowski checks on a vat of beer at his brewery.

“My wife had bought a gift certificate for me from the local home brew shop in Columbia for a Christmas present. And I bought a little extract kit and brewed our first batch of beer on the stove in January 2007,” he says. “And the joke was it wasn't terrible, so we decided to try another batch and it just kind of went from there.”

His interest grew over the years.

“I was also writing a beer blog at the time, too. Just trying to get more involved in the craft beer community is what really sparked a lot of interest and passion for me,” he says. “I felt like the quality of the beer that I was making was getting better. About two or three years into it, I really felt like — maybe not every batch — but I was certainly able to make beer that I thought was just as good as the stuff I could buy at the store.”

As the couple discussed the possibility of making brewing more than a hobby, Nicole got a job opportunity in Florida. The couple spent three years there before moving back to Greenville in 2015.

“That’s when we really started the brewery process in earnest — finding a location, getting funding,” Brian says. That process took about three years and Fireforge Crafted Beer was born.

“We got two years in and things are kind of settling down,” he says. “And then suddenly, the world shuts down and it's like we're basically starting over.”

When the spring 2020 pandemic shutdown began, Fireforge laid off most of its employees and began selling to-go beer in cans to customers who were stuck at home with little to do. 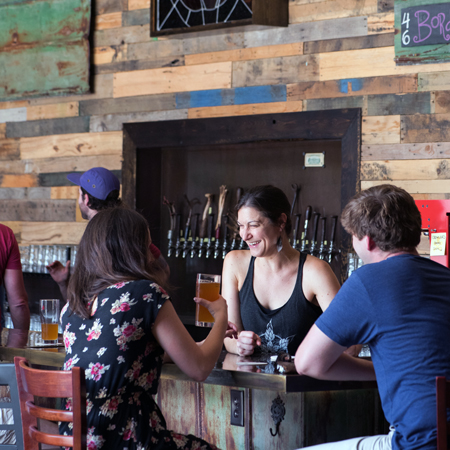 “We didn’t have a ‘crisis section’ within our brewery business plan,” says Nicole, who over the years parlayed her English degree into marketing communications and business development. “In the midst of a lot of change, we got more strategic — with our own twist of scrappiness and creativity.”

Fireforge made the most of its outdoor and open-air spaces, as those areas were determined to be safer during the pandemic.

“We knew that as soon as things reopened in summer 2020 that we were going to have to focus on that outdoor space,” Brian says. “So we had picnic tables built and really tried to maximize that outdoor open-air space.”

Even though he has left corporate work behind, Brian thinks his business school education prepared him well for life as a business owner.

“It really gave me a foundation and a vocabulary,” he says. “I can look at the balance sheet and understand what’s going on or talk to the bank about financing or speak to potential investors.