Remembering the Days: Harry Walker, the underdog who won

When students at the University of South Carolina elected a new Student Government president in 1971, the event made national news. That's because, just eight years after the university was desegregated, an African American student won the election, riding a wave of support from white and Black students who were tired of the "establishment" and "the system."

If you like to pull for the underdog, that person who, at first glance, might have looked like they didn’t have a snowball’s chance of winning — you’ll probably find this story appealing.

I’m Chris Horn, your host for Remembering the Days, and today we’re going back 50 years to 1971 when a Black student, for the first time in University of South Carolina history, was elected president of student government. The student was Harry Walker, and his victory made national headlines because this was the Deep South at a time when the notion of racial equality was more aspirational than real. South Carolina had been a whites-only institution up until 1963. 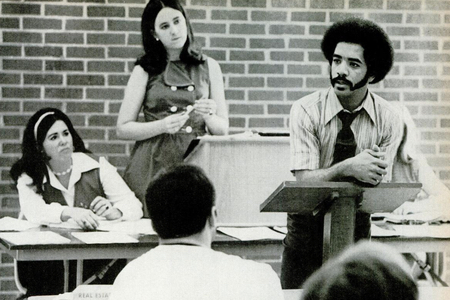 Harry Walker addresses the Student Senate as president of the university's Student Government in 1971. Walker was the university's first Black student to be elected to that position. (Image from August 1971 edition of Ebony magazine.)

It’s important to think about what was going on at the university in 1971. It was just one year after the May 1970 riot that had brought National Guardsmen and a whole lot of tear gas to campus to quell student unrest. There was still tension over undercover narcotics agents on campus and anti-Vietnam War protests sprouted up every so often.

In some ways, the world seemed like it was turned upside down, and in the midst of that, Harry Walker, a mild-mannered Black student, decided to run for student government president at South Carolina’s flagship university.

Luther Battiste: "Harry was a perfect candidate. He was handsome, articulate, he was the leader of the Association of African American Students. He had natural charisma, I mean, just well-dressed. He was just the entire package that you would want in a candidate."

That’s Luther Battiste, a long-time lawyer in Columbia, who 50 years ago was a senior majoring in international studies at the university and Harry Walker’s friend. After he convinced Harry to run for president, Luther became his campaign manager. He sensed that this was the moment in which a non-traditional candidate just might have a chance to win. The thinking was that students would see a vote for Harry Walker as a vote against the establishment, a vote against the system. And many of the 14,000-plus students on campus were clearly tired of the system. Luther and Harry got together recently to reminisce about their political collaboration from a half-century ago.

Luther Battiste and Harry Walker: "And that was pretty, pretty bold thinking for the time to think that that could be done, because traditionally the type of candidate that would run was somebody from an old South Carolina family that had worked at the State House, that was connected in … (Harry chimes in): politics, involved in fraternity, that kind of thing. (Luther resumes): Yeah, absolutely. That was the model, and Harry was nothing like the model."

From the start, Harry's goal was to run a professional campaign with a 10-point plan that appealed to what students actually cared about — better food service, co-ed dorms and more financial aid. The campaign slogan was “Let’s Get Things Together,” and Harry was determined to get out the vote.

Harry Walker: "It was very, very clear that we were going to not just be doing something to do it. We were going to have a real campaign with real issues that addressed the issues that we thought were important to the students on the campus. And we were going to actively go out and ask people for their votes. I had been on campus. I had always lived on campus. I had never had a person who was running for the president of the student body come in my dorm and ask me for my vote. And I don't ever remember them coming out to anybody else's dorm and asking for a vote."

With Luther as his wingman, Harry was determined to outcampaign the three other students running for president and that meant going to every dorm on campus and to many of the fraternities and sororities to appeal for their votes. He reached out to everyone: undergraduates, international students, student veterans and graduate students.

Harry Walker: "We always put forth our best effort. We always tried to speak to the issues. We tried to be respectful of the audience that we were speaking to, not to speak down to anyone, nor were we trying to demure ourselves in order to just get a vote. We were able to speak, I think, forcefully and effectively in order to do the kinds of things that we would do.

"We had people voting that normally would not participate in an election. And those are the kinds of things that  manifested the win — the turnout, addressing the issues and getting people involved who would never be involved in a student government election. Yeah, I mean, the numbers that we turned out were were historical."

Harry had arrived at the university in 1968 as one of about 70 Black freshman students, the largest contingent of first-year African Americans since the university had desegregated in 1963. There were fewer than 400 Black students on campus at the time, and Harry wasn’t running for president on the platform of being a Black student, but he was the only Black person in the field of four candidates. The color of his skin did not go unnoticed.

Harry Walker: "Was there racism? Absolutely. Were there Confederate flags being flown? Absolutely. Were there letters [00:10:20] that were calling us everything but a child of God being written to us during and after? Absolutely. I mean, the times had not just totally changed because we were students at the University of South Carolina. I mean, the University of South Carolina was a reflection of what the state of South Carolina was at that time. So we were dealing with racial issues, but we were also running a campaign that was designed to turn people out who normally would not turn out."

When all the votes were tallied that spring, Harry Walker took 2,068 of the total 3,820 ballots, garnering more votes than were cast for all three of the other candidates combined. In the eyes of the news media in 1971, a Black student winning a high-profile contest at what had been an all-white university in the Deep South was a big deal. National news outlets covered the story, and Ebony magazine included a huge spread entitled “Big Man on Campus” about the historic win. Harry reveled in his victory and then rolled up his sleeves and went to work as the student government president.

He didn’t accomplish everything he had spelled out in his campaign — what elected official ever does? — but he laid the groundwork for things that became reality a short time later: the establishment of a student ombudsman, co-ed dorms and — my personal favorite — the opening of the Golden Spur, a bar that decades ago sold beer and wine in the Russell House.

Harry went on to earn a master of public administration degree from Carolina and enjoyed a long, successful career with IBM. Luther Battiste graduated, went on to Emory for law school and returned to Columbia where he launched his law practice and served for many years on the Columbia City Council.

Since that historic event 50 years ago, other Black students — men and women — have been elected student government president at South Carolina, and the university’s minority enrollment has increased dramatically.

That’s all for this episode. Next time on Remembering the Days, we’re going to revisit a now-demolished university residence hall that was exclusively for married students. One couple who lived at University Terrace apartments says the cockroaches were so big and so prevalent, they had names. Remembering the Days is produced by Communications and Public Affairs at the University of South Carolina. I’m Chris Horn, thanks for listening and forever to thee.