Nick Stathopoulos, a senior media arts and sociology double major at UofSC, is premiering his first official production Good Samaritans at Film Fest 919 in Chapel Hill, North Carolina, on October 29, 2020. The film explores the homelessness crisis, the reality of complex morals, and differing political ideologies as it relates to the “system” in America. It will be shown alongside the upcoming movie Fatman, starring Mel Gibson.

The project was filmed in July 2020, in the middle of the COVID-19 pandemic, in Charlotte, NC. “The inspiration to create it came from the desire to give an accurate depiction of how complicated the human spirit and perspective actually is — specifically in America,” says Nick. “The film primarily deals with the issue of homelessness, but on a deeper level the characters depict the two leading and opposing ideals as it relates to how those on the outside view those on the inside — whether the inside is referring to those who are homeless, or any other group who is at a disadvantage.”

At a politically and socially unstable time in the United States, this film “helps illustrate how complex human morals are, and how our ideals can often conflict with one another,” says Nick, “but I also feel this is an important story to digest in order to understand that everyone’s personal beliefs are a reflection of the life they have lived.  The film gives credence to both political ideologies, which allows viewers to understand both viewpoints and reach their own conclusions about homelessness.  The hope is that anyone who watches the film will keep an open mind to hearing both characters out.”

As Nick finishes his final year at UofSC, he’s thankful for the Media Arts program in helping him get to this point in his career. After graduation, he plans to continue producing films under his production house Vintelnus Productions. As an aspiring writer and director, he hopes to work for Marvel Studios. 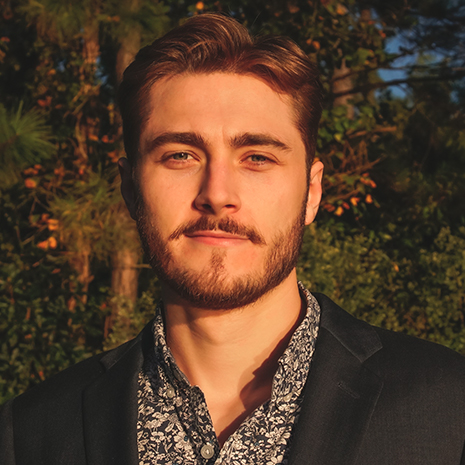 Nick Stathopoulos (pictured) and co-writers Jake Lawler and Conor Lawler tell a story of the complexity of human experience.

Good Samaritans synopsis: "After seeing a homeless man get abused during their meal, two men from different walks of life debate the homeless crisis in America before heading off to work."