Dr. Peter Chametzky, Professor of Art History in the School of Visual Art and Design, recently published a new book—the first to examine multicultural visual art in Germany. Turks, Jews, and Other Germans in Contemporary Art (MIT Press, 2021) fills the gap of non-ethnic Germans' emergence as some of Germany's most influential visual artists. By examining the work of over 30 German-based artists who derive from Turkish, Jewish, Arab, Asian, Iranian, African, Sinti and Roma, Balkan, and Afro-German backgrounds (among other ethnicities), Chametzky rejects the fiction of an exclusively white, Christian German culture, arguing instead for a cosmopolitan Germanness.

Since its release in September 2021, the book has garnered international attention in renowned art magazines and academic journals. The Istanbul art magazine Art unlimited published an interview with Chametzky in its March-April issue. The four-page (70-74) spread features seven images from his book and an author portrait. The German art magazine Monopol also discussed the book in its December issue as did an article in the February issue of Art Asia Pacific (Hong Kong). A brief section from the book, “Crossing Borders, Imagining Heimat: on Art and Home,” featuring artists who have escaped wars in their original homelands, and made homes and art in their new German ones, was posted to The MIT Press Reader on March 15.

In the first academic journal review of the book, in Images: A Journal of Jewish Art and Visual Culture (March 2022, pp. 1-3), Maud Lavin evaluated it as a “compelling, needed study...complex, critical, and accessibly written...[that] powerfully advocates a thoughtful amplifying of the work of Germany’s minority artists and a change in the acquisition and exhibition practices of Germany’s art museums.” Comparing it to Isabel Wilkerson’s 2020 book Caste, Lavin wrote: “Chametzky’s effort, while more localized in considering the formations and re-formations of one nation’s culture, should be related to this kind of broad study, so necessary to lay the groundwork for governmental and cultural reform.”

Prior to its publication, the book received the sole honorable mention award in the art history category for Germany’s Hans and Lea Grundig Prize, which recognizes artistic and scholarly work shedding light on artists suffering oppression and exile. Completion and publication of the book were supported by grants from the College Art Association’s Millard Meiss Publication Fund and the College of Arts and Sciences at the University of South Carolina.

Turks, Jews, and Other Germans in Contemporary Art is published by the MIT Press. You can obtain a copy online through major book retailers. 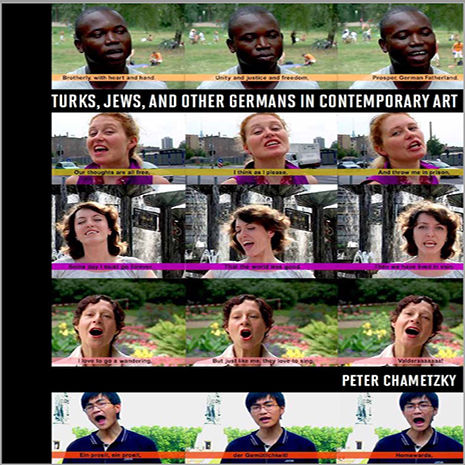 A multicultural view of visual art in Germany

“Chametzky's is a welcome call to question racialized definitions of 'Germanness' and, ultimately, to redefine our surprisingly stagnant understanding of what constitutes German art today.”